His Piehole Is A Shithole 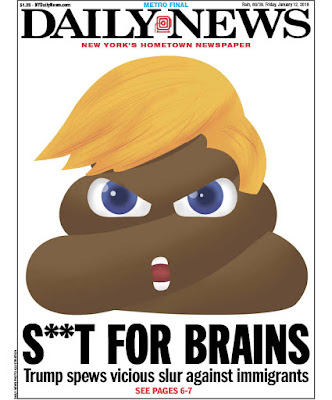 “Being president doesn’t change who you are. It reveals who you are.” (Michelle Obama.) The same can be said about a president’s supporters.

The point isn’t that Donald Trump, Very Stable Genius, compared countries containing dark-skinned people to the last stop indigestible fiber and billions of bacteria make before exiting the colon. In part, it’s how it made undeniable his racism, and that of those who’ve been bending over backwards to pretend it isn’t. And it’s the clarity in the unabashed delight of his base when they heard the news: David Duke was orgasmic.

Even that, though, is less important than how it shows Trump neither understands nor loves what America has, until recently, always meant; and how that contempt is revealed in his policies. The American idea is both foreign and anathema to the Very Stable Genius, and, now revealed undeniably, to his rebarbative supporters. To Trump, America is riches to be plundered. It’s a zero-sum game, a grift, an endless source of aggrandizement; the humanitarian miracle for which it stands means nothing to him. And he’s made it a place where he needn’t fake it. Enough people love him precisely for his racist gutter talk and his bluff ignorance that he assumes it’s okay.

How okay? Congressional Republicans lightly tapped Trump with the “unhelpful” stick. Fox “news” apostles told us it’s just how people talk. Rand Paul said calling him a racist makes negotiations on immigration difficult. (No, sir. It’s his racism that makes it difficult.) Senators Cotton and Perdue (the latter once encouraged praying for President Obama’s death) claimed they “don’t recall” hearing the words, hours after attending the meeting. Then, when the VSG decided to lie about it, memory miraculously restored, flat-out insisted he didn’t. Later, in a display of condescending logomachy, they weaseled that “-house vs. –hole” makes some kind of difference.

People who leave destitute countries to come here risk everything. In so doing, they identify themselves as courageous strivers; indeed, such families produce high-school and college grads and professionals at a higher rate than typical white, native-born Americans. Their crime rate is lower. They, not Trump, are the people making America great. They always have; now more than ever, as Trump and his cohorts attempt to make us a country ruled by white male billionaires, insulated and protected by purposeful stupefaction of everyone else: bible-schooled, science-illiterate, history-deprived, propagandized into docility, “faked” out of the means of resistance.

Immigrants the Very Stable Genius derides fled that life, intent on bettering themselves. (Trump profits by employing Haitians on the cheap.) Norwegians? Other than to experience the character-building effects of impoverishment following medical care, and retirement insecurity, why would they come? (The happiest country on earth, Norway is a flourishing democratic-socialist atheist-majority country where, according to Trump, the people “work very hard.” Norway refutes every argument Republicans make for their policies.)

There’s no doubt Trump said it: Lindsey Graham, lately a supine, unapologetic Trump apologist, attended the meeting and confirms it. Hardcore right-winger Erick Erickson tweeted that Trump called friends to brag about it.

“You can’t say things that are false ― knowingly false ― and be able to smile as money pours into your bank account,” said the Genius last week, obliviously believing he can change libel laws. Trump, whose falsehoods since taking office now exceed two thousand, who raised membership fees at Marks-are-Loco to $200,000 and has charged the Secret Service at least that much for using its golf carts. Whose D.C. hotel is Pay-to-Play Central.

Our democracy can’t sustain wondering if a president is telling the truth, and when his party lies to protect his lies. When -- the one thing they’re right about -- they’ve come to count on getting away with it. When ordinary citizens convince themselves, in the face of overwhelming contrary evidence, that their leaders aren’t lying. (Cue Trumpists: “But Obama said you can keep your doctor…”)

To today’s Republican electeds, and, evidently, their voters, the founding ideals by which our nation once illuminated the world have become abhorrent. So has truth. Donald Trump, Very Stable Genius, is both cause and result.