The Art Of The Shutdown 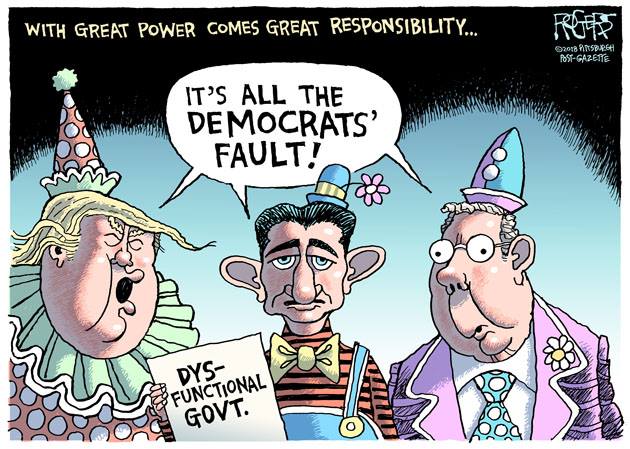 Trump’s shutdown came and went, because Democrats trust Mitch “Lucy with the Football” McConnell. It’s hard to decide who’s most at fault, but these words ring true:

“… I actually think the president would be blamed. If there is a shutdown, I think it would be a tremendously negative mark on the President of the United States...”

That was the guy currently posing as president, back when Barack Obama held the office. Later, he declared: “Here’s the truth, the gov't doesn’t shutdown. All essential services continue. Don't believe lies.”

Circumstances were different, of course. For one, Trump’s is the only shutdown to occur when one party owned the presidency, Senate, and House. But there’s similarity: last time, it was over Republicans’ desire to deny medical coverage to millions of adults. This time, it was about denying it to millions of children, plus throwing almost a million innocent people (for starters) out of the country. The common thread: concern not for people but for ideology, demanded by wealthy benefactors and enabled by confused supporters. (The stopgap agreement includes more budget-busting tax cuts; and, though it funds CHIP, it leaves community health centers, which serve many CHIP recipients, unfunded.)

Having non-fake concern for our military, Dems put forward a bill to ensure they and their families would receive pay and benefits during the shutdown. Rs rejected it. But Trump called it #Schumershutdown, which (not kidding) immediately became the top trending hashtag on Russian influence-peddling networks. (#no-collusion.)

Donald Trump, artist of the deal, promised to bring his business prowess to the presidency, and he did. In particular, his talent for bankrupting ill-conceived and poorly-managed enterprises, pocketing the money and walking away, leaving others to deal with their devastation. The genius deal-maker, who, in May, said “our country needs a good shutdown,” cajoled the opposing party with tweets like this: “… Dems want a Shutdown in order to diminish the great success of the Tax Cuts ... (capitalization his.)” That’s a firkin of fiction in a bolus of bullpucky. “The shutdown is good for us,” explained Trump scion Eric, disembagging the cat.

Democrats made a proposal directly to Trump which included his gossamer wall and increased military spending in exchange for reaffirming DACA and CHIP. Reportedly, he accepted the offer, after which General Kelly, who, when heading DHS, loved nothing more than deporting people, overruled the “president.” So we learned who’s in charge. And that the “president” is dangerously untrustworthy.

Following his embarrassing failure, Trump produced a vile ad claiming Democrats are “complicit” in murders committed by illegal immigrants. No doubt his supporters love it, but brave Paul Ryan stood tall, saying, “Look, I’m not going to comment... I don’t know if that’s necessarily productive.” Powerful stuff. (Off topic but enlightening: Ryan raked in $500,000 from the Kochs mere days after his tax bill passed.)

Commanding the moral high ground, Democrats stood firm until, as usual, they didn’t. (Some say it was brilliant strategy. We’ll see.)  Against Trump’s loathsome lie that they “want illegal immigrants to pour into our nation unchecked,” they held out for a whole two days for Dreamers, who are supported by nearly ninety-percent of Americans.

(In fairness, Democrats are always disadvantaged during government shutdowns, all of which have happened under Republican control, ending when Democrats give in. They consider government useful, and have empathy for those affected when it closes. Republicans, who don’t and don’t, are happy to use their decency against them. And Dems did have a bad hand.)

It’s only the most irredeemably Foxified who don’t know, or care, that Dreamers are young adults brought here innocently, years ago, as babies and children, now qualified for DACA by being law-abiding, tax-paying, productive people, deportation of whom accomplishes nothing good for America. But it enhances Trump’s adulation by his rock-bottom remainders.

If it once was, illegal immigration is no longer among our major problems. It became a trickle under President Obama and remains so under Trump. To the extent immigration needs fixing, let’s do it. Right after health care, climate change, inequality, and pollution; and preserving voting rights, public education, and press freedom.

His instinctive turning to hypocrisy, lies, and slander after his failure was Trump at his worst. But wait, this just in! He’s for a path to citizenship for Dreamers? I’m impressed. Will his supporters be? And will Kelly let it stand?