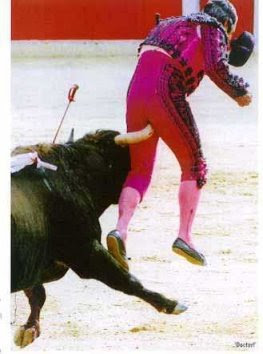 My problem is that when things drive me crazy I feel like writing. Just pacing around and seething feels unhealthy. Ranting to my wife, while, like certain other things, feels better than handling it myself, is a little like spousal abuse. So I write. But at the same time (I've liked that phrase since hearing Lou Pinella say it in about every interview, when he was manager of the Mariners, and before and after), I know it's an entirely useless bit of self-indulgence which matters not a whit in the larger order of things. Were this stuff to wash over me like a wave, I'd be happier; of that there's no doubt. (Great video in that last link, by the way.) I've tried ignoring it, I've tried just not writing; nothing really works. I'm pretty sure the healthiest option would be to push an icepick up my nose eye socket and lobotomize myself (that's how it was done, originally, if you didn't know).

Among the latest ladling of idiocy is the vacuous and disingenuous hyperbole in Congress over the idea of "releasing" terrorists from Guantanamo into the US. What, they're gonna sneak them into your town in a van with its lights off, open the door, boot 'em out, and drive away under cover of darkness? And, y'know, if the ACLU has anything to do with it, they'll be given US passports, guns, and ammo. If the revolt had started with the Dems, you'd expect the Repubs would be claiming they're dissing the loyal prison workers who've managed to keep all sorts of terrible people wrapped up in high-security facilities. (And whadya know, just after writing that sentence, I see this, while searching for a quote on another subject I'd seen earlier.)

Of course we've all come to expect this sort of nonsense from Congressional Republicans and the RWS™. There's no level of stupidity below which they won't sink. But now it's Harry Reid, too. What a waste of skin and bone he is. How frustrating must it be for President Obama to know when he deals with these people he's the only adult in the room.

It's beyond parody. It's mortally depressing. And these guys are writing laws!

Like the credit card one, into which Tom Coburn inserted an amendment allowing visitors to bring concealed and loaded weapons into national parks. (How long before some drunk camper kills a guy in the next tent because he thought he was a bear?) Do Republicans really approve credit card protections only when there are Sams in Yosemite? More importantly, why do lawmakers get to decorate bills with entirely unrelated pet projects? And will Obama find no way around it?

So you see my problem. There's an endless stream of stupidity coming from Washington at a time when intelligence is most needed, impossible to ignore. I'm trying to make something out of the tail end of my life, wanting to have a little pleasure as the sun sets, a measure of security, the ability to stop worrying whether I'll even have a future, let alone be able to afford it. Much as I'd love to, I can't turn it off. And given the certainty that there's nothing meaningful I can do about it at this point, I find myself drawn back to writing, even as I know it's a waste of time. Ever since English 1-2 at Amherst, I've found that writing clarifies and crystallizes; it's inseparable from thinking. And even if it's like "Spirit," the poor old Mars rover, well past its time of usefulness, spinning its wheels in sand, I guess I'm doomed to continue. For now. It's not as if there's not plenty of substrate.
.