Say It Ain't Ain't So 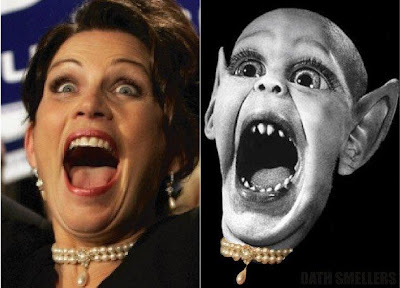 I couldn't force myself to watch the video in which she made her announcement, but none of the summaries indicated she said god told her to quit. (Well, this one did.) Which, if true, is weird. He's told her to do pretty much everything else she did. I'm trying to figure out what it all means, but, as I indicated yesterday, at the moment I'm still somewhat under the influence of don't-give-a-shit.

Assuming god had nothing to do with it, though, it kinda makes you wonder what he'd been thinking when he whispered in her ear a few years ago. My guess: he wagged a finger to some archangel, or, better, Thomas Jefferson, or Karl Marx, or Gandhi, and said, "Check it out guys. This is gonna be really fun."

You might think that, knowing all like he does, god saw what was coming. But maybe even his omniscience took a hit; maybe he really had no idea how crazy she is; maybe he finally said, yeah, well, funny is funny, but it's time we started helping my chosen country get its shit together before people like her take it down, past recovery.

That god. What a trickster. What'll he think of next? How bout bringing a building down in Bangladesh, wiping out a thousand innocents. Moms, mostly. Naw, he wouldn't do that, would he? He's like all about love.