More Bullshit From The Most Fabulous Bullshitter Of All Time 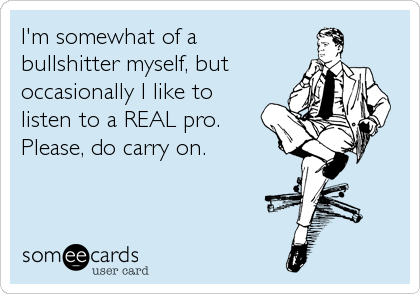 Remember that secret, amazing, foolproof, beautiful plan to defeat ISIS? The one Donald J. Trump has been promising to reveal and enact once he takes office, the one he doesn't want known before that because someone might steal it? Remember how he's assured us he knows more about ISIS than "the generals?"

Yeah, well, turns out his secret plan is to ask for a plan. From "the generals." Smart. Because I guess no one has thought of asking for that yet. Because I guess until Donald Trump, they didn't even know what planning means.


... "I don’t want the enemy to know what I’m doing," Trump told Fox News in May 2015, the month before launching his presidential campaign. "Unfortunately, I’ll probably have to tell at some point, but there is a method of defeating them quickly and effectively and having total victory.”
He added: “All I can tell you it is a foolproof way of winning, and I’m not talking about what some people would say, but it is a foolproof way of winning the war with ISIS." ...
Then, in a June 2015 meeting with the Des Moines Register editorial board, he offered a different reason for keeping the plan under wraps — that his opponents would steal it. "The problem with politics is if I tell you right now, everyone else is going to say, 'Wow, what a great idea.' ... But no, I have an absolute way of defeating ISIS."...
I believed him, didn't you? So this is a little disappointing, fabulous foolproof-wise:


... Well, now we know what Trump's "foolproof" and "absolute" plan for defeating ISIS is — to ask the generals to come up with a plan, quickly. That's what he said he would do during a speech Tuesday. "They'll have 30 days to submit to the Oval Office a plan for soundly and quickly defeating ISIS," he told supporters in Greenville, N.C.
These are the generals, mind you, who Trump has said don't understand ISIS like he does. "I know more about ISIS than the generals do," he said in a rambling Iowa speech in November. "Believe me."...
The wall, though. We'll definitely get the wall.

Email ThisBlogThis!Share to TwitterShare to FacebookShare to Pinterest
Labels: Trump's foolproof ISIS plan, Trump's plan for defeating ISIS, Trump's plan is to ask for a plan