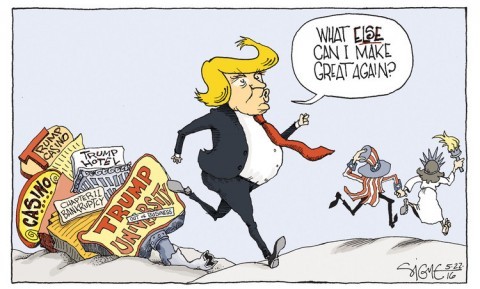 
How many Trumpophiles have discussed his bribery to quash investigations of his phony “University?” Of those who have, how many consider it irrelevant, while believing donations to the Clinton Foundation indicate pervasive corruption? Something mysterious is going on.

Trump makes a generous donation to the campaign of Florida Attorney General Bondi four days after she announces the investigation. A month later, she shuts it down. After which he hosts a fundraiser for her at Mar-a-Lago. No quo or pro in that quid? Same with a fat donation to then attorney general, now Texas Governor Abbot’s campaign after the investigation into the same thing was dropped, deep in the heart. Perfectly fine. For, quoth Donald, “I’ve got to give to them, because when I want something I get it. When I call, they kiss my a$$...” Pure as Trump Water. Trump brushes off questions like orange dandruff. But Hillary? Flagitious.

Trump’s Florida “donation” was doubly illegal: “charitable” foundations are prohibited from contributing to political causes. Nevertheless, a much larger contribution went to a group attacking the New York prosecutor going after Trump U. In the past several years, Trump has given little to his fund; so its few donations come from other people’s money, as did his purchase of a portrait of himself for twenty grand. And he’s used it to settle legal problems, including a fraudulent hole-in-one contest. His “foundation” is little more than a slush fund.

Compare to the Clinton Foundation, which does enormously important work around the world. Investigations have found no significant granting of favors to donors. Nor were those requests comparable to payoffs for dropped criminal investigations. (Appealing for help freeing Korean hostages!) How many know that the Clinton Foundation, which, among other things, provides AIDS medication for millions of people, receives the highest ethical ratings for charitable organizations, higher even than The Red Cross? How many even know what it does?

Trumpites seem unbothered by his blatant bribery and cheating. Maybe many are unaware of it. Why? Because not just their favorite sources, but also so-called “liberal” media had until recently virtually ignored it, while pumping out repetitive innuendo about Hillary’s relation to her foundation. “Liberal” media concluded, evidently, that nothing they discovered about Donald Trump enlightened or mattered to his voters; for eyeballs, better to go after Secretary Senator Clinton. Only when bloggers kept highlighting Trump’s unscrupulous actions have they started covering them. Will people ever hear about his payoffs for tax breaks on Fox “news?”

A few years back, Trump paid three-quarters of a million dollars to settle an antitrust lawsuit (“I never settle lawsuits,” he’s said). Briefly, we saw some of the business owners Donald bankrupted by refusing to pay what he owed them. Then, like Trump casinos, coverage folded. How long has it been, though, since major news organizations mentioned the Clinton Foundation or her conspiracy-theory-laden emails? In the midst of a Congressional investigation into improperly influencing US Attorneys, George Bush’s White House “lost” twenty-two million emails. Republicans were unconcerned. Hillary’s deletions? Treasonous.

Have mainstream articles described Trump jacking up prices at his properties when used by his campaign, billing the campaign, paying himself from its funds, scamming donors? If the race is tightening it’s because of this imbalance in reportage.

Of course the press should investigate Hillary Clinton. Done impartially, that’s their job. (They blew it with those hammered phones.) But their months of obsession with her while only now awakening to Trump’s conspicuous corruption is as puzzling as the fact that Republicans nominated such an irrefragable fraud in the first place. It seems they’d succumbed to inundatory right-wing claims of media bias, designed to shut down investigative journalism. Without irony, a Trump surrogate recently associated fact checking with liberalism. Besides, the more Donald Trump’s lies are exposed, the more he repeats them.

Lately the weight of Donald Trump’s career of deception and malfeasance might, at last, be forcing mainstream media to do their job. That his career is one fraud after another is obvious, and it’s just as apparent that his supporters don’t care. The question is whether those who consider both candidates equally bad will, as the evidence mounts, ever open their eyes.