Because There's Nothing Jesus Loves More Than War 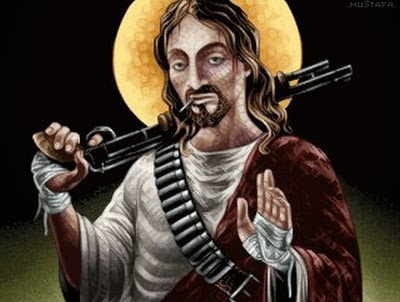 It's no joke: we're being led by religious zealots who neither understand nor accept the idea of religious freedom; who see the US as exclusively a Christian nation; who have no respect for anyone who disagrees. Not to mention that they also believe war is the best thing America does; has ever done; will ever do. Truly, we are screwed. And it's not just this guy: the entire Republican party is perfectly fine with it.

A Republican congressman has introduced legislation that would force cadets at the Air Force’s Academy to say “so help me God” during their oaths every school year. He said the legislation is necessary because Americans don’t have “freedom from religion.”

Rep. Sam Johnson (R-TX) said the bill, called the Preserve and Protect God in Military Oaths Act of 2015, would protect the religious freedom of American troops.

“Our Constitution’s very First Amendment protects every individual’s freedom of religion. But our servicemen and women who protect our county with their lives are seeing that freedom under fire,” he said in a statement.

The U.S. Air Force Academy announced in 2013 that cadets would not be required to say “so help me God” while reciting the Honor Oath.
The oath, which the cadets recite at the beginning of every school year, reads: “We will not lie, steal or cheat, nor tolerate among us anyone who does. Furthermore, I resolve to do my duty and to live honorably, so help me God.”

Johnson said the Air Force’s Academy only made the end of the oath optional “because of one radical atheist group’s demands!”