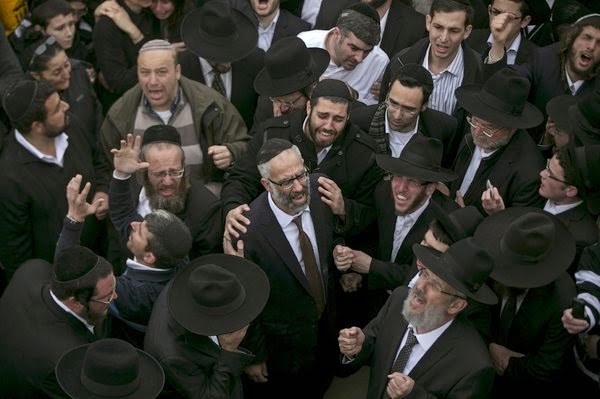 When I was in about the fourth grade, I wrote stories. One was about a family out for a drive, with a statue of Jesus, or Mary, or maybe it was St. Jude, on their dashboard. There was a crash. Everyone survived unhurt, except for of one of the kids whose eye was poked out by the statue. My awakening to irony and mythology was possibly precocious.

And now this. Not made up. Horrific. Horrifying. Seven kids killed, on the Sabbath, by a fire started by a hotplate, used in lieu of an open flame, per Orthodox Jewish rules. How unspeakably awful. And let's not invoke irony here, because there are no subtleties: it's just too terrible from all points of view. But can we finally all agree that -- or at least wonder if -- we're much better off if there is no god; because if there is, he's truly an awful entity. Cruel. Uncaring. Egotistical. Criminally abusive. If he's there, let's just stop pretending that he cares about our supplications, or that he deserves our praise. Let's stop groveling and try to make the best of a bad thing. Because if this sort of thing happens, what difference does it make? He'll do what he'll do, and it won't be nice. People rationalize how this can be, with vapid answers. Like abused kids, they still love the abuser. Praise the lord.

How not to feel deep sadness for the family; for the mother who (so far) survived the fire, for the dad off to a religious retreat for the weekend. Honoring the god of their beliefs with more devotion than most, suffering the greatest of all possible tragedies. And reaching the dad was made harder by rules against using electronics. On the Sabbath. Seems obvious that family would still be alive and together, had they not followed those arbitrary rules.

How to reconcile this sort of occurrence with the lengths people go to, following variably prescribed dicta based on contradictory interpretations of the oft-translated and mistranslated and regularly misconstrued words in books of dubious origin. How to explain continuing to do so in the face of so much evidence that there's no one there, on the other end, listening or caring? Miracles, or answers to prayers, are what we call it when he does something unexpectedly decent. It's because of their rarity that we consider them deliberate, while ignoring the implications of what, by definition, are his less pleasant and altogether more frequent acts. Strange.

There is, of course, something satisfying in ritual, whether it's based on religion or family tradition. Weekend picnics. Playing "Oh Hell" after dinner. Climbing the fence to get to the annually-appearing pond and greeting the latest generation of frogs and salamanders. Beyond the fun, it's comforting to count on certain things, against uncertainty. I get that, and I'm all in. For that matter, I always (mostly) liked our Seder dinners, especially because Grandpa skipped over half the pages in the Haggadah. I thought it was funny. And I still miss him.

But why add the unnecessary layer of magic? As Ted Cruz rallies evangelicals to "vote their values," exhorting them to crown him their king so he can ascend to his destiny, justifying regressive, cruel, selfish, astonishingly hypocritical, and shallow policies to gain the praise and payments of the rich and powerful, can't we yet see the danger of it all? Is there no way we poor humans and our miserably fearful minds can find a way to face reality, to live well and good and happily, generously, empathetically, for no reason other than that it's right? Objectively right. As opposed to the cruelty of Ted Cruz. Do we really need a book of self-canceling tales to keep away our fears? Do we really need to follow made-up rules designed to make us think we're more in control than we really are (not to mention pay the clergy)? Can't we just face life as it is? Wouldn't it be healthier?

But, of course, no, we can't. It's not how we're built. "That's all there is" isn't enough. Too scary, too tough to swallow. And, for so many, I guess, too hard to see the higher morality in good for goodness' sake.

So, magical thinking it is. It keeps the monsters from taking root under the bed. It gives meaning to those unable to find enough of it within themselves and their loved ones. It's better than living in fear, I guess. Better than being overwhelmed. But what a bitter commentary on one's view of life: tolerable only by hiding from its most central feature. And if there's a more despicable view of life and one's own sense of morality than that of the right-wing hater-icon and grifter extraordinaire of Duck Dynasty fame, I don't know what is. Absent his much-proclaimed faith, he says, he'd be a rapist and murderer, and so would you.

I'm indescribably sad for that poor family in Brooklyn, and their friends and their congregation. More, I'm deeply worried about the future of a once-great nation, increasingly turning to magical thinking as our self-created problems become ever more challenging.