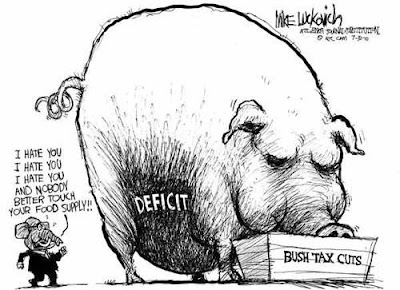 I've argued many times here that fiscal sanity for this country will require that both sides of the political spectrum accept some things they don't like. Taxes will need to go up, spending down. Spending cuts will have to include such conservative holy ground as the Pentagon, and such liberal lines in the sand as entitlements. The "leaked" preliminaries from Obama's budget resolution group indeed have things unlikeable for both sides. But it seems way too tilted against the needy in favor of the very wealthy.
Cutting the top tax rate to 23%, it seems to me, is WAY ridiculous. It's a huge giveaway to the very wealthy, to pay for which they, among other things, eliminate mortgage deductions. Such a change will be significantly more painful for low and middle income earners than the rich.
Twenty-three percent? To get there they propose raising retirement age and medicare eligibility, reducing or eliminating medicaid. My view of entitlement reform is to begin with indexing it to need, not to take it away from the needy. To lower taxes to 23%? It seems, to put it neutrally, an exceedingly conservative plan. Completely unrealistic, in other words. Hey, my house is paid for, so losing the mortgage deduction won't affect me. I'd love to pay only 23% in taxes. But I think it'd be absolutely wrong. There are things we need to do for ourselves and for our fellow citizens. It's a pipe dream to think such low taxes would provide enough except with the most draconian stripping away of the so-called safety nets.
Instead of a mix of tax increases and spending cuts, it appears they've gone for huge tax decreases, and very unbalanced spending cuts that will significantly harm the average American while richly rewarding the wealthy ones.
It's entirely consistent, however, with the Republican version of compromise: come to our side and we'll agree (and as you approach, we'll keep stepping back). Somehow I'd thought the commission would have felt the need to meet in the middle. Alan Simpson, sort of likable in an unlikable way, for his unapologetic irascibility, is a very hard-core conservative. Erskine Bowles is, at best, a middle-of-the-right-side-of-the-road liberal. It seems the deck was stacked from the beginning. (After seeing his choices for co-chairs, can anyone still think Barack Obama is a communist socialist far left America-destroying Nazi Muslim terrorist? Duh.)
If I were in Congress, and the only choices were to vote for the proposals or to revert back to our current state of double-talk and pretense, I'd vote for it, because we have to do something. But I'd hope there'll be a serious period of making it more balanced between tax and spending cuts. I'd also hope for a money tree in my back yard, and a tap in my kitchen with an endless supply of chocolate syrup, calorie free but still as luscious Dilettante's Ephemere.
Happily, thanks to a fun simplification by the NYT, you can have a crack at budget resolution yourself. Here's mine. I think I did it without hurting the people who need the most help.