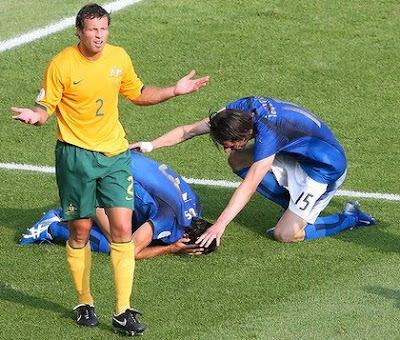 You can't really love soccer if you don't hate it.
I'd never seen a soccer game until my son started playing it. As he got better and better, making more and more highly select teams, which won more and tournaments and state championships, I came to appreciate what it took. Years, is what it was. As opposed to, say, (American) football, in the playing of which he scored a touchdown the first time he got the ball in a game. Tucking a ball under your arm and running with it, even if quickly and trickily, isn't anything compared to running full speed while controlling a ball with your feet. And then striking it, getting it to go more or less where aimed, still running full out. Or receiving and settling it, also while running, using only your feet, or your chest. Or both.
At a big-deal invitational tournament in Canada, work kept me from the first game. When I arrived at the motel the next morning, another dad told me I'd missed the best game he'd ever seen (our kids had played the Canadian U-17 national champions). I asked the score. Zero-zero (nil-nil, as it's said.) That's when I knew we were true fans.
But it does drive me crazy. Scoring is incredibly hard. A team can dominate another and lose, and it happens all the damn time. Infuriating.
I could never play soccer: too slow, too clumsy. And yet I was a pretty decent rugby player, which says something about skill. Back then, there were no subs in rugby, so we kept playing unless they had to carry you off. It's laughable to watch soccer players -- especially world class ones, like Ronaldo -- dive and roll over and over and over (point of observation: a player who is actually hurt will lie still. One that's a big bag of fakery will roll over and over and over, or flop around a lot. For super athletes, these guys are embarrassing; and they're not even good actors. Rich Franklin broke his arm and kept fighting Chuck Liddell. And knocked him out.)
With family and friends, we were at the World Cup in 1994. (I had to work for the final, but my wife and kid were there. Decided by penalty kicks, the shoot-out saw the Italian hero Robert Baggio boot his chance to save it for his country.) We watched Brazil sweep up the sides like peregrine falcons, center the ball with the grace of gods. Surrounded by Cameroonian fans wearing lion costumes, we reveled in the good vibe. We saw crazy fans, eighty-five thousand of them filling Stanford Stadium, faces painted, waving flags, beating drums, wearing tribal costumes and marching down streets. No badness, all happy to be there, crazy in love with the game.
It was the most fun at a sporting event, ever.
And not a single frickin' vuvuzela.

Email ThisBlogThis!Share to TwitterShare to FacebookShare to Pinterest
Labels: soccer