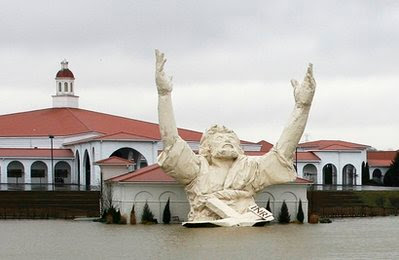 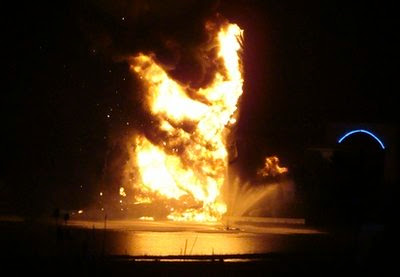 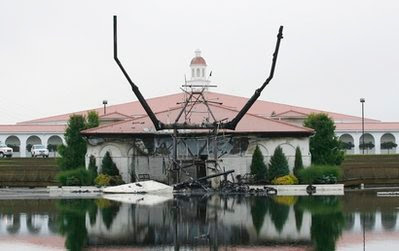 It was a lightning strike, in case you hadn't heard.

It's safe to assume, I assume, that many -- if not all -- of the members of that church believe in miracles. Surely they pray for interventions of one sort or another all the time: that's what believers do. So what could be more of a sign from above than a bolt from the blue, taking out the statue with inerrant aim (leaving intact, according to reports, the adult video store next door)? On what basis could a believer-in-miracles reject the event as an act of their god? I mean, if we pick and choose, then what's the point? I've said it before: if the kid who survives the school bus crash is a miracle, so are the ones that died.

It's gotta be a message, right? What message, I can't say. Perhaps only art criticism: it was, after all, a pretty tasteless monstrosity, egregiously outsized, seemingly pleading for someone to pull him out of the water (can you imagine the macerated feet, the shriveled...?) Still, were I in the congregation I'd be a bit loath to rebuild, which, they are saying, is the plan. I'd suggest they leave it exactly as is.

Because, isn't rebuilding that craven image a direct affront to their god? If a lightning bolt, in the context of Jesus and a church, isn't about as clear a statement as you can hope to get, what the hell is? Or if it isn't, how can they claim to be able to interpret any event; how can they continue to pray for signs, for miracles? What's the point, if you're gonna reject that as a message pitch, high and tight?
Really, I'd like to know.