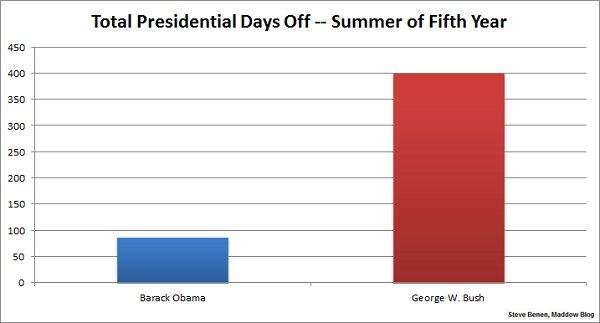 It's like the teleprompter thing: like Barack Obama is the only president who ever used one. But this insane trope is even more widely bazooked by teabagging crazy people. Every time our president takes a couple of "vacation days," they scream the scream of the screaming screamer. His "kind" are lazy, donchaknow, is the sub-rosa whistle. And yet it's stupid and demonstrably false on every level: There's never been, and probably never will be again, a president who took as many days "off" as GW Bush.


Like most presidents, Obama invariably will be criticized for taking time off for a vacation — and, in this case, to a wealthy enclave in deep blue Massachusetts.

But Obama has taken far less time away from the White House than his predecessor, George W. Bush, who spent weeks at a time at his ranch in Crawford, Texas. Obama has taken 87 days off, compared with 399 days for Bush at a similar period in his presidency, according to CBS News’s Mark Knoller, who keeps detailed records of presidential travel.


And, of course, in defense of all of them, it's not like a president is ever really off, or out of reach. Still, the strident stereophony from the right about Obama's trips to Hawaii or M. Vineyard are even more pathetic than most of their bogosity.