Tales From The Operating Room 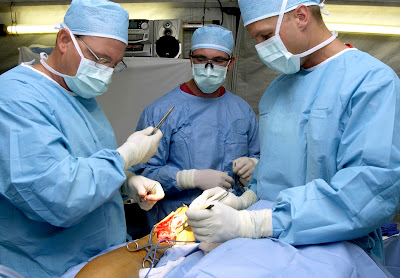 Kevin MD, probably the most widely read and longest surviving of the medical blogs, with whom I used to have the occasional online intercourse, as it were, back in the good old days of Surgeonsblog, has been running my lengthy and multi-part series, deconstructing an operation. In which I tried to provide as much detail of colon operation as possible, to let the reader in on what happens in the OR. The latest installment has just been posted (about number five of ten). Since I don't have much to say at the moment (how much of the same old shit from the same old shitters can one take and make interesting?) I'm posting it here, for a little sampling (in addition to Kevin's site, the entire series can be found here as well):


Would you know what I mean if I describe whistling without whistling? Barely pursing the lips, making little quasi-audible windy sounds while inhaling and exhaling, in tune yet nearly silent? Unless there’s music playing, that’s what I do when I operate. And for reasons about which I have absolutely no clue, I nearly always “whistle” The Caisson Song. I’ve always wondered if anyone in the room noticed. I suppose if anyone did, they’d eventually recognize it as a sign of contentment.

“Over hill, over dale, looks like things are going well …”

So it’s “hi hi hee” to cut the colon free. I grasp the sigmoid again, and pull it upward then downward, looking to see where the bottoms of the loop fall, determining how much looser I need to make it before removing the damaged portion. Having mobility not unlike that of the sigmoid, the rectum can be made to stand up and out of the pelvis with a few judicious snips of its surrounding peritoneum. No matter how extensive the diverticula, they always spare the rectum. (The anatomic definition of the rectum is a little loose, not unlike the actual organ. I consider it to be the part of the colon that starts below the pelvic brim, and continues to the anus.)

And since I’m doing the writing, in our patient the diverticula trail off markedly at the upper end of the sigmoid, as is typical, so the resection is less extensive. I unzip the white line a little higher, maybe up to above the left kidney, and achieve enough mobility to get point A to point B after the sigmoid is in a pan. And now, what used to be the most annoying part of the operation: clearing the chosen spots for division, and making them ready for the placing of clamps.

The blood supply to the colon comes, more or less, from the center of the abdomen and radiates out like the hands on a clock. Taking the clock analogy beyond its limits, if you want to remove — as in this case — a section of colon from three to five o’clock, to get to the blood supply you make a pie-shaped pair of cuts from those numbers to the center of the dial. The difficulty is in direct relation to the amount of fat within the mesentery. Once in a while — rare enough that it makes you want to be able to record it in your brain and replay it in your dreams — you can hold the bowel up and see right through the mesentery. It takes a very skinny person. More beautiful than the wings of a mayfly, it’s spectacular calligraphy on wetted rice paper, the vessels visible in their spidery and laddered connections; clamping them off — individually, precisely — is exhilarating and easy, as if there were no choice but to do it.

Most often, though, it’s hardly that beautiful. In my early years of training, the process frustrated me. Turns out, there’s a trick: the fat in the mesentery nearly always thins out right at its border with the colon. Grasping the colon over the top, I can usually feel the lower edge of the bowel; pushing toward myself from the opposite side, feeling my way to that edge with my middle finger, I come at it from my side with the tip of a curved clamp. Judging the resistance to be sure I’m not punching through bowel, looking over to the other side to confirm, I push the tip onto my middle finger, and wiggle it through. “Two-oh tie.” (It’s a thread without a needle on it.)

I push the clamp further through, spreading my fingers to let it pass between them on the other side, and then I open the clamp. Joanie directs the end of the tie between the jaws of the clamp, and I pull it back through, bringing my end to the top so it’s around the bowel, and I click it into the clamp. Point A. I repeat the process at my selection of point B. Now I literally have a handle at each end of the bowel where I’ll divide it. And having made that little hole, I’ve opened the peritoneum on each side of the mesentery and can insert the tip of a scissor. The fat recedes. I can easily move it off the bowel surface and, turning the scissor centrally while pulling backward on my suture-handle, incise the tensed peritoneal layer with a push of the blades all the way to the root of the mesentery, from which the vessels fan out. This unroofs the underlying fat, and I can scrape at it with the closed scissors, pulling it away from the vessels hidden underneath.

And there they are. To make ready for clamps, I punch through the mesentery above and below each vessel that I see. And here’s a situation that distinguishes elegant surgery from the brutal: it takes only a moment to clear each vessel separately. Some surgeons do, some don’t. Having gotten to the base of the mesentery, you can just “walk” back up to the edge of the bowel with a series of clamps, not really seeing any of the vessels you’re dividing, grabbing them by inference, along with globs of fat. It works, as long as you don’t take an enormous bite (if you do, when you release the clamp as you tie a tie, the glob may fall away and bleed.) But in my view, it means choking off a wad of fat which will die and inflame and generally add to the work of healing. Plus, it looks bad. And when you see each vessel, you can save some time by applying clips instead of clamps and ties. Which is what I do.

It’s like jazz (the Caisonnity-sonitty song?): winging it with regard to when I squeeze on a clip, and when I feel like using clamps and ties. (I never leave a clip near the bowel surface: it’d be in the way of the anastomosis.) Given the same curtain of blood vessels on two different days, the music might sound different, who knows? “Clip… Clip… ‘Nother one… Clamp… Clip… Clamp.” Get a feel. Go with the flow, the size and the nearness of the vessels. And, after all the upstream ends of the vessels have been controlled, I may or may not clamp the back-leak ends before I divide them. Depends on the size of the resection, how much I can control with my left hand. Sometimes I click a clamp ex post facto. If so, I never waste time tying them off, since it’s all coming out — unless the resection is so big that we’ve run out of clamps.

For a total colectomy, I might use the LDS stapler, which clips both sides of a vessel and divides it all in one beautiful gas-powered “k’chzzz,” delivered from a very satisfying pistol-grip. I don’t trust it for big vessels; I add another clip on the business end before pulling the trigger. One way or another, I scissor through the vessel after controlling it, usually whisking the instrument to my wrist (as previously described) when receiving the next clip or clamp. So now we’re ready for the coup de grace. The sigmoid colon is free of its attachments. Holding it up, the mesentery hangs off it like a bib, maybe dangling a clamp or two.

“Couple’a betadine laps.” For beauty, and for infection protection, I drape the field around and under the bowel with lap pads soaked in povidone/iodine: luscious chocolate brown drapery covering the entire field, with only the bowel loop visible above it. A presentation fit for royalty. Museum quality, it ought to be in a lighted display case. With two OR lights aimed right at it, it is.

It takes four long intestinal clamps: two delicate ones that stay (for now) with the patient, and two who-cares ones that go away with the specimen. The former I place with the handles aiming at my assistant, the latter toward me. Picking the first pair, she holds hers, I hold mine and I slice between them with a #10 scalpel, the one I used for the initial incision. I wipe the cut end of the bowel with a betadine-soaked sponge. Ditto for the second pair. Then I hand off the bowel, hanging like an abandoned hammock between the two clamps, drop it into a pan, along with the now-contaminated knife. I like the heft of it in my hands, the rattle and clang of the clamps and knife in the metal pan. With a total colectomy, the weight of the specimen is such that the receptacle dips in the outstretched hands of the nurse. Now that’s surgery!

“What should I call it?” the circulator asks. (She wants to know what to write for the pathologist.) “How about ‘Dave?’” I say, as usual …