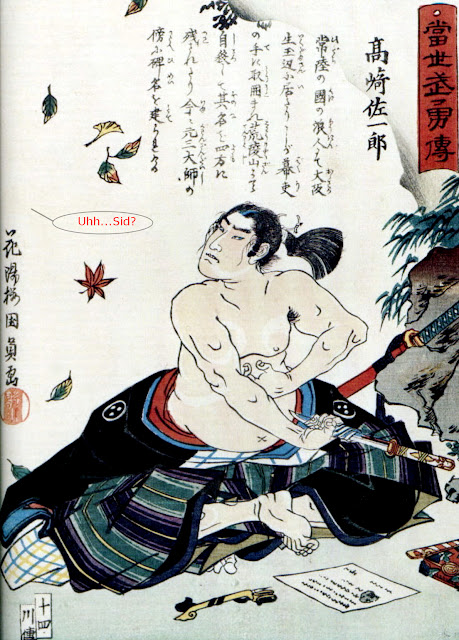 Long-time reader and appreciated commenter (well, they were all appreciated, in their rarity) Eugene in San Diego sent the above cleverly-edited pic in response to my declaration of quitting my weekly newspaper column. Other than the fact that I don't have that much hair...

Anyhow, having met recently with the op-ed editor, nice guy, scion of a well-known senatorial family around here, I guess I'm gonna hang in there a while longer. So here's today's newspaper offering borrowed extensively from my previous blog, and intended to cool the crazies for a week:

Surgeons of all specialties share certain characteristics of the job: the specificity of each task, the ability do much good, paired, like the dual faces of Janus, with the ever-present possibility of causing great harm. There’s the need to compartmentalize, the requirement to be cognizant of the human being at the other end of the knife, while focusing on the work in a dispassionate way. But, to me, there’s no surgical specialty that compares to mine, general surgery, in its variety and breadth, and in the sharing of the number of secrets the human body holds.

General surgery is both forebear and inheritor of it all: once, there were none but general surgeons, who took on whatever was required. Hardly a relic, handling only leftovers, the general surgeon, as other subspecialties have carved off a chunk and gone in various directions, remains the one who’s capable of being the family surgeon: operating on dad’s colon cancer, mom’s breast cancer, the kids’ hernias and, later, their appendicitis, maybe, or just some little lump. Thyroid problems. Gallbladder and pancreas, stomach and bowel pathology. Adrenals, esophagi; we embrace them all, and more.

The true general surgeon, like I was, is going the way of the dinosaur, a mere six thousand years later. For many reasons, surgical trainees are increasingly opting for narrow subspecialties, confining their practices in ways both good and bad. But that’s not my point. My aim today is to share a couple of the secrets of operating inside a belly, where hidden spaces and planes and possibilities are there for the knowing, making an operation always thrilling and, when fully understood and properly done, the most intimate art form, the beauty of which is as transient as a Buddhist sand painting, a gift to patients that they’ll never fully apprehend. And, frankly, the absence of which is unlikely to matter much in most cases: unartful surgery will, usually, get the job done. Had the body no ability to heal itself, we couldn’t even begin.

While still embryonic, your forming intestines float outside your body, part of the remaining yolk sac. Over time, they corkscrew into the belly, applying the colon to the inner surfaces, attached at the sides, mostly free across the top, deriving its blood supply from the center. It horseshoes around the small bowel, which is much longer and freer to slither and slide, while still sharing that midline blood supply. This central connection of the colon means, with the right technique in just the right place (there’s a virtual dotted line to follow, called the “white line of Toldt”) the colon can be delivered right out of the abdomen without disturbing its blood supply. That tender process, that nearly bloodless dissection, always excited me, like I’d been let in on something extraordinary, given a key to a puzzle box.

Nearly separate from the main part of the belly cavity lies a space called “the lesser sac.” Entry leads you to a magically pristine tiny cavern, bounded by the front of the pinkish (when unsullied) pancreas and the back of the stomach. Access is essential for any kind of stomach or pancreas surgery; once inside – again, made simpler by finding exactly the right layer of cells – you can move around unencumbered. It’s as if it was made that way for surgeons to be there. A finger-size tunnel in: the Foramen of Winslow. There are safer portals, but it’s a neat name.

If not a passageway, how’d you like to have a maneuver named after you? Theodore Kocher, nineteenth-century surgical pioneer, did: he noticed the wrapper holding the duodenum against the backside of the abdomen, and that opening it in just the right place allowed the freeing of that first part of the small intestine, as well as ingress into dangerously important territory of big vessels, the space behind the pancreas. “The Kocher Maneuver.” How cool.

Everything early surgeons did was new and bold; their innovations still bear their names. But, inevitably, things change. There’s nothing I did at the end of my career that was like it was when I first learned surgery. Yet some I gave up reluctantly: hand sewing bowel, the way it was invented, made me feel connected to those surgical greats; not to mention the fact that the result was a lot more beautiful than a stapled connection. And if it took a couple minutes longer, it saved several hundred bucks worth of eventual scrap. That’s a concern of which I never let go.