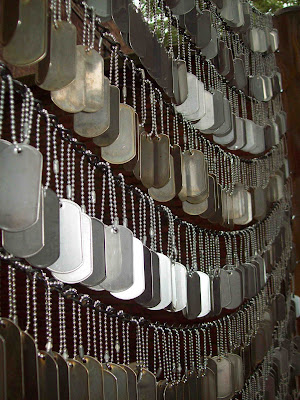 [Re-posted from a couple of years ago.]
For me the significance of Memorial Day is the recurring reminder that the story of war is -- or should be -- the story of the people who fight them and not of those that start them or support them from the safety of their homes. Wars begin because of the failures of leaders: their stupidity, their selfishness, their blindness, their need for power. For them, it's at a level far removed from those called upon to respond to their failures; with little if any personal pain, they make decisions for which people will die. Money will be spent. People will be mobilized with thoughts of patriotism, will find themselves chanting the name of their country, convinced that theirs is the just cause, that their survival depends on following those leaders who, by definition, have let them down. I think, particularly, of our succession of undeclared wars, most of which were for questionable or overtly phony purposes. Vietnam, Grenada (what a sick joke), Iraq, even Afghanistan, a message pitch, high and tight, abandoned early for a grand illusion.
My view of the Vietnam war was, comparatively, from the balcony, but I was there. I cared for the injured, I was (mildly) injured myself. I came to understand how easy it is to dehumanize the enemy, and, more importantly, how quickly the fight becomes about one's fellows and has little if anything to do with the supposed reasons for being there -- assuming the real reasons were ever stated, much less known.
It'll never change, of course. Because of issues about which soldiers likely won't know, and with a sense of patriotism so easily manipulated that both sides will feel it equally, off they will go, to the pain of their families and to the safe and comfortable pronouncements of heart-felt support of their nations, so easily conjured by the men in charge.
The almost unmentionable fact is that it seems we humans like war. For soldiers there's an intensity of relationships and of purpose, annealed by danger and the need for rising above oneself, that exists nowhere else. When I served, I believed the friendships I formed were the most profound I'd ever had. I was sure they'd last forever; and yet, after I was home, they disappeared nearly as quickly as they formed, and I'm not sure what that says about me. I'd like to think it's because I found something in my life more based in more durable things: family, being a good surgeon, the training for which immersed me so deeply that the rest of the world nearly disappeared; but I don't know. I do know that, rightly or wrongly, because of transcendence or giving in, for many there's nothing like those relationships ever again. To those that have gone through it, I give recognition; to those who died for it, and to their families, I owe much.
But to those who haven't, yet wave the flags, profess their love of country, especially whether "right or wrong," who get all teary-eyed at the passing parade and all hateful-eyed at those who don't, who define patriotism as saluting their flag and not much else, and who think "support our troops" is a bumper sticker -- about those people I'm not so sure. On Memorial Day we hear it said how wars have been our finest hours. For the soldiers, fighting to save themselves and to protect their buddies, with or without a sense of duty and honor, it may well have been. For many, it most certainly was. Called upon to perform heroic acts, to live in unimaginably horrifying conditions, they did. But was that the finest of what they might have been capable? Is that really our best? Shouldn't we hope to hell that it's not? Is life really so meaningless that in war we find our highest purpose?
As much as I honor and respect those who have fought in our wars, and as much as I am aware of the loss of those who died or whose lives were permanently damaged, that much and more am I disgusted by the smirking and secure, the rich and righteous hypocrites who foment the hatred, who prey upon human weakness and misery, who use the unspoken sense of purposelessness that so many people have and turn it, cynically, into faux patriotic pride. Over war. Over the threat of war. Manipulating the mistaken but nearly ubiquitous belief that war is good, that war is righteous, that war is who we are, they win elections, they revel in the spotlight, they spew untruths through the airwaves from their well-padded seats at the table of public opinion. It's shameful.
In having gone to war, dutifully, voluntarily or not, with high ideals or not, mistakenly or not, there's no shame. But at the thought of having been led there with deceit there's great sadness. For those leaders whose cynical recognition and manipulation of our over-arching human frailties, our desperate need for meaning; for those who, generation after generation, translate so easily our weaknesses into willingness to see war as greatness, and to define patriotism in terms of how we respond to that idea; for them I have mostly contempt.
In wars there are countless acts of individual greatness. In some wars nations have responded to need and risen to greatness. But wars are not great; only the people who fight them. And the people who fight them, I remember this Memorial Day, are, mostly, doing so at the behest and consequence of people who are wrong more often than right, who have their own unspoken purposes, who have run out of ideas, and who are decidedly not great.