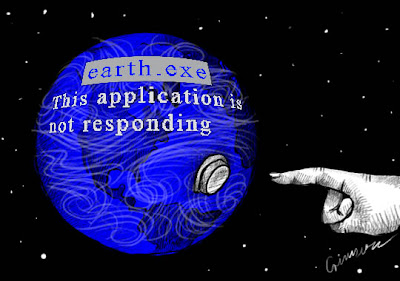 Damn. My emotional fall-back regarding the possibility of a Rominee presidencee or, worse, R takeover of both houses of Congress, was, who cares? The world is ending 12/21/12, right?
Maybe not. Now what will I do?

In case you missed the newsflash, the end of days will not be December 21 of this year. You will need to buy holiday gifts after all.

“That is correct, the world will not end,” says William Saturno, the Boston University archaeologist behind a new paper that could help put to rest the long-held myth that the ancient Mayans predicted a 2012 apocalypse...

Saturno’s report, which he unveiled in this week’s edition of the journal Science along with colleagues from the University of Texas at Austin and Colgate University, deals with a fascinating trove of calendars and paintings from a Guatemala excavation that have many in the anthropology community hopping with glee. And not just about the delay of the world’s end.

[...]
Most intriguingly for modern-day doomsday prophets, the scribblings include four long numbers that represent multiples of set units of time using the Mayan calendar. In one column, time stretches reach 7,000 years into the future. Bingo! The apocalypse myth, says Stuart, is that the Mayan calendar shows the world ending after 13 periods, or 5,000 years, also called baktun. We are supposedly coming up on the end of the last one.

This new find, however, is further proof that that belief is mistaken, says Stuart. The mural shows 17 baktuns, showing “there was a lot more to the Mayan calendar than just 13 baktuns.”

The Mayan calendar reaches far beyond the year 2012, the scientists assure us.

Email ThisBlogThis!Share to TwitterShare to FacebookShare to Pinterest
Labels: end of the world 2012, mayan calendar