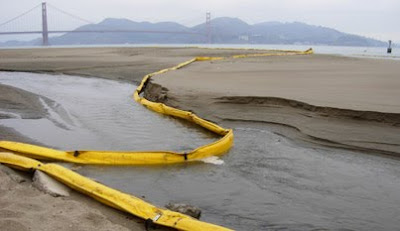 I just watched a really disturbing video, about the booming -- or lack thereof -- of the Gulf Coast. It's full of really bad language, so much so that I'll just provide a link as opposed to embedding the clip. But for those of you who wouldn't be offended by pervasive use of the f-word and occasional use of the c-word, it can be seen here.
In short, it argues that the placing of booms has not only been inadequate and incompetent but has, in fact, been mainly for show. It claims that proper booming can prevent oil from coming ashore. It suggests media have been complicit -- or, at minimum, useless -- by failing to let people know. (My opinion: they'd rather talk about political impact and show dead birds than do actual reporting, which takes work. And intelligence.)
It's really, really disturbing. If it's a fair statement of what's possible and what has not, in fact, been done, then everyone involved deserves.... I don't know what. Hanging, maybe. And if President Obama knows this and has let it slide it's inexcusable; and if he doesn't know this (assuming it's a true representation) then he's failed miserably to have found out what he needs to know. Same with Jindal, Barbour, Congress, the lot of them. They're disgusting beyond words.
I must say that I've wondered from the beginning how those pathetic little booms could be expected to work in anything but flat water. On the other hand, I'm just a guy with too much time on his hands. The people doing it, responsible for it? Shame on them. Beyond shame.
Unless the person on the video is lying. Which I seriously doubt.