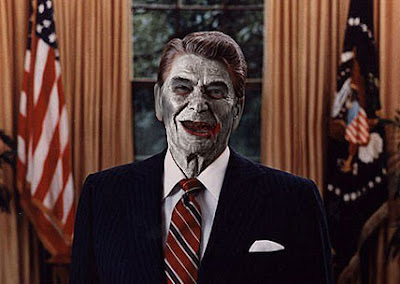 As I've said here in various ways at various times, it's been clear from the time of his ascension that the Undead King of Republicans started this country on its inexorable descent from greatness. Selling smoke, as he used to sell smokers, he convinced his subjects of something patently impossible, like perpetual motion (and, by golly, the idea lives perpetually): namely, that you can have everything you want, and not pay for it. Even if by "you" is meant "you, and not... them." Ronnie, revered as only false gods can be revered, told people what they wanted to hear, let them believe what they wanted to believe, and set sail on the course to ruin, holding the tiller while Republicans rode rapturously. Rowing still a sunken ship, his rudderless retinue of relics regale recalcitrant regretters of receded royalty with raptuous rhetoric, rarely regarding recent reality. Ruinous Ronnie Reagan: razer of the Republic.
So, here's an article that displays it quite well. Not, of course, that such data will convince believers. Belief, after all, is what you use when evidence is either lacking or refutes your magical thinking. But, always hopeful that a single person might, for a second or two, have clarity before shrinking from it as Nosferatu shields himself from sunshine, I offer this:

"It seems that you can look at a chart of almost anything and right around 1981 or soon after you'll see the chart make a sharp change in direction, and probably not in a good way. And I really do mean almost anything, from economics to trade to infrastructure to ... well almost anything. I spent some time looking for charts of things, and here are just a few examples. In each of the charts below look for the year 1981, when Reagan took office.

Conservative policies transformed the United States from the largest creditor nation to the largest debtor nation in just a few years, and it has only gotten worse since then:" 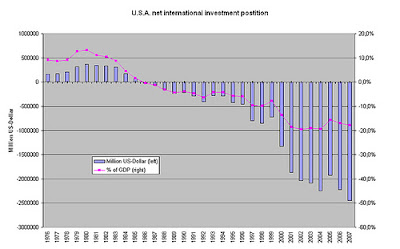 There follow, in the article, several more charts in logical sequence, showing the same trend, the same break point, in various economic parameters.
The year of our lord nineteen eighty one is exactly the time to which Congressional Republicans, the RWS™, and Foxobeckian teabaggers would like us to return. (After Reagan, ever so briefly, there was a moment when a Republican was, by some measure, serious about fiscal responsibility. He was, naturally, summarily disowned by the true believers.)

Twenty years ago, the last serious Republican effort to reduce the budget deficit took place when George H.W. Bush agreed to negotiate with congressional Democrats on a budget deal. As a consequence, many Republicans disowned his efforts and abandoned him in 1992, leading to his defeat. Today, the idea of cooperating with Democrats on deficit reduction is viewed as a total loser by all Republicans. Until that perspective changes, the elder Bush will remain the last Republican who took fiscal responsibility seriously.

Hey! Now that I think of it, if we could teabag our way back in time, we should. AND VOTE RONNIE OUT OF OFFICE BEFORE HE EVER GETS IN. Now THAT'S what I'd call taking our country back!!