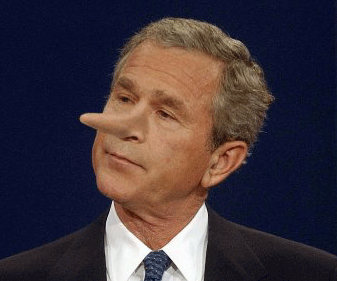 Two years ago, in acknowledging that the US took prisoners to other countries for "questioning," George Bush said (I'm quoting from a NYT article that appeared 3/15):

“...the C.I.A. used an alternative set of procedures.” He added: “These procedures were designed to be safe, to comply with our laws, our Constitution and our treaty obligations. The Department of Justice reviewed the authorized methods extensively and determined them to be lawful.” (emphasis mine.)

The article is worth reading in full. Among the descriptions of "safe" and lawful procedures:

"I was taken out of my cell and one of the interrogators wrapped a towel around my neck; they then used it to swing me around and smash me repeatedly against the hard walls of the room.” The prisoner was then put in a coffin-like black box, about 4 feet by 3 feet and 6 feet high, “for what I think was about one and a half to two hours.” He added: The box was totally black on the inside as well as the outside.... They put a cloth or cover over the outside of the box to cut out the light and restrict my air supply. It was difficult to breathe. When I was let out of the box I saw that one of the walls of the room had been covered with plywood sheeting. From now on it was against this wall that I was then smashed with the towel around my neck. I think that the plywood was put there to provide some absorption of the impact of my body. The interrogators realized that smashing me against the hard wall would probably quickly result in physical injury.”

There's much more. It should also be said that the article is based on a comprehensive report by the International Red Cross, which conducted extensive interviews, and that the prisoners had had no contact with each other; in addition, they were told that the information would not be made public. That they described virtually the same things lends believability.

“They placed a cloth or cover over the box to cut out all light and restrict my air supply. As it was not high enough even to sit upright, I had to crouch down. It was very difficult because of my wounds. The stress on my legs held in this position meant my wounds both in the leg and stomach became very painful. I think this occurred about three months after my last operation. It was always cold in the room, but when the cover was placed over the box it made it hot and sweaty inside. The wound on my leg began to open and started to bleed. I don’t know how long I remained in the small box; I think I may have slept or maybe fainted."

The conclusion of the IRC report states:

I know at least three of my readers are saying "So what?"

Let's leave aside the issue of whether torture is useful (because it's pretty clear it isn't) and whether we should be doing it (since it gives unreliable information and eliminates trying the prisoners in a court of law, we shouldn't). Let's just ask: did it serve US interests to have our president get up and lie, bald-faced, about such a thing as this? And what should we call a "Department of Justice" which ignores the law to serve up only what the president wants to hear? And finally, since by international agreement it's the International Red Cross that identifies instances of torture, what is the appropriate legal response? (Rhetorical question. We already know the answer, and we know nothing will happen.)

Email ThisBlogThis!Share to TwitterShare to FacebookShare to Pinterest
Labels: George Bush, prevarication in the extreme, torture