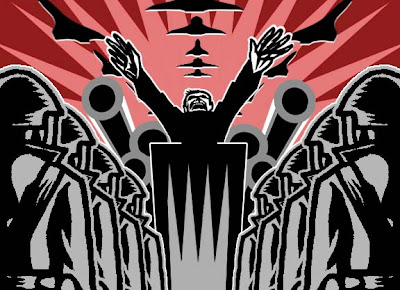 Preserving what little sanity I have left, and able to generate diminishing amounts of calm, I tend to avoid reading right-wing blogs and their other sources of what passes for thought. But I do have enough of a sense of it to be amazed (after all this time, after eight years of rationalizing everything Bush did, yes, they can still amaze me) at the reaction to the release of White House memos on presidential power in wartime. ("Wartime," naturally, to be defined by the President.)

In short, these memos baldly argue for a dictatorship, unfettered in any way. Literally. Including, but not limited to, suspension of the First Amendment.

The opinions reflected a broad interpretation of presidential authority, asserting as well that the president could unilaterally abrogate foreign treaties, ignore any guidance from Congress in dealing with detainees suspected of terrorism, and conduct a program of domestic eavesdropping without warrants.

Some of the positions had previously become known from statements of Bush administration officials in response to court challenges and Congressional inquiries. But taken together, the opinions disclosed Monday were the clearest illustration to date of the broad definition of presidential power approved by government lawyers in the months after the Sept. 11 attacks.

The opinion authorizing the military to operate domestically was dated Oct. 23, 2001, and written by John C. Yoo, at the time a deputy assistant attorney general in the Office of Legal Counsel, and Robert J. Delahunty, a special counsel in the office. It was directed to Alberto R. Gonzales, then the White House counsel, who had asked whether Mr. Bush could use the military to combat terrorist activities inside the United States.

The use of the military envisioned in the Yoo-Delahunty reply appears to transcend by far the stationing of troops to keep watch at streets and airports, a familiar sight in the wake of the Sept. 11 attacks. The memorandum discussed the use of military forces to carry out “raids on terrorist cells” and even seize property.

The Oct. 23 memorandum also said that “First Amendment speech and press rights may also be subordinated to the overriding need to wage war successfully.” It added that “the current campaign against terrorism may require even broader exercises of federal power domestically.”

The concept that a president can declare some sort of war and then claim the right to do anything he or she wants, at home and abroad -- searching, seizing, arresting, silencing -- with no regard for prior laws or Congress ought to frighten us all, regardless of political party. That a recent president was advised to do just that, by people he hired to give him legal opinions, and came close to carrying it out while Congressional leaders in his party looked the other way is something that ought to repel us all.

Can anyone doubt -- is there the merest molecule of doubt?? -- that if this had occurred during the years of Bill Clinton, Republicans would have been, and would be still, calling for his head? Investigating up one side and down the other? Demanding prosecution? Is silence from Rush and Sean and Bill and Ann and Laura and Mitch and John and John and Michael even imaginable?

The Sinclair Lewis quote has become a cliché; no one really gives it a second thought: "When fascism comes to America it will be wrapped in the flag and carrying a cross." How close we've come. And yet, not only has there been no resistence from the right; it's been cheerled and justified.

There's a reason we have a constitution, and that it -- quite brilliantly -- established separation of powers and checks and balances: to keep exactly this from happening. But in a country wherein less than a third of people can name the three branches of government, it's hardly inexplicable why so few seem to care. And when, in states that elected the guys who nearly pulled it off, school boards are spending more time trying to remove science from schools than they are insisting on civics education, it all begins to make sense. Deliberately lousy education leading to inability to reason; faith-based faith that everything is okay; consolidated media with flame-throwing screamers perverting the idea of discourse and discussion; politics of division aimed at keeping people focused on the other side of the mirror. It's working.

They came damn close to pulling it off. Confident they've got nearly half the country in their thrall, they're still trying.

"When fascism comes to America it will be wrapped in the flag and carrying a cross." For that is exactly the way to get the public neither to object, nor even to notice. In nearly half the population, it's working.