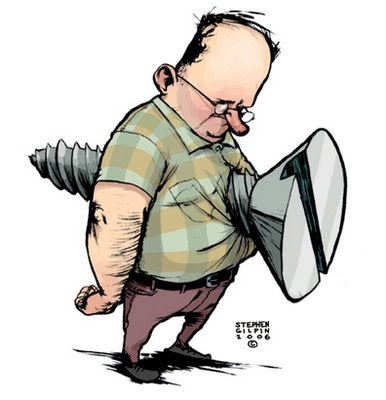 By now everyone has seen the Jon Stewart/Jim Cramer interview (if not, it's here, in unedited form.) It's amazing to me that, as far as I know, the only place in the media where such a revelation has occurred is on a comedy show. (I give Cramer credit for showing up!)

The central point -- and one of which I'd say I was vaguely aware but had never formulated so clearly -- is that there are two investment worlds. The one that such networks as CNBC hype is the one in which most of us think we are participating: find good companies, or funds, invest in them for the long term. Solid, careful, thought-out. And then there's the other, about which those same networks clearly know, in which the monies thus invested are taken into the back room and morphed into shady deals, highly leveraged, risky business, making the players fabulously wealthy, using our hard-earned and hopeful money as their means for quick and massive enrichment. At our expense, making off with millions. With us taking all the risk. Unknowingly, for the most part.

Sure, it's more complicated than that, and "we" are not exempt: we've become convinced/duped that money can be made out of thin air, twenty, thirty percent a year, getting rich doing not a damn thing. Ignorant of, or ignoring, the house of cards -- imaginary cards -- on which it's all been built.

Maybe the most perfectly encapsulating comment in the entire show was when Jon Stewart, having shown clips of Cramer the hedge-fund manager baldly (!) talking about how he manipulated markets to make quick money, said "I want the Jim Cramer on CNBC to protect me from the Jim Cramer in those clips." (Or words very close to that.)

Stewart asked, but was not really given an answer: who is the audience of those financial shows and their talking heads, from their point of view? What do they see as their mission? Ginning up the substrate for their friends in high places to play with, winking all the way; or letting consumers know what's going on? And there's the problem: to lift the curtain would be not only to drain the brown bathwater in which they bathe; it could be an end to the quick-buck thinking that got us where we are today. Make people reconsider their whole raison d' etre.

Which is way too French.