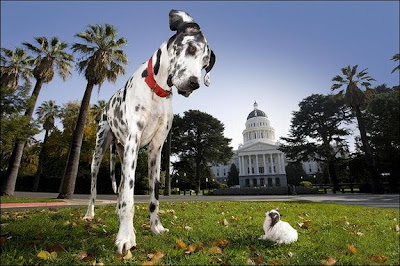 On one level, it's funny. On another, pitiful. But I can neither laugh at nor feel sorry for the callous cadre of Congressional and collectively crazy conservatives who are resorting to stupidity to attack President Obama. Because, as we know, stupidity is seductive. Stupidity works. Stupidity, as substitute for problem-solving, is what they do best. Ronald Reagan mastered it as political art form; George Bush subsumed it at a molecular level. And since, during those times, people ate it up like chocolate mousse (food of the gods, far as I'm concerned), there's no reason to believe that, bit by bit, repeated over and over, it won't eventually work again. Murder by spoon. Sure as hell, they're giving it a go.

And so it is that the response to Obama's appearance on 60 Minutes is that he was laughing. Which means, most assuredly, that he doesn't care. Or, as the wise among us predicted, they foment anger about the AIG bonuses into an attack on his veracity. While blaming him for fomenting anger! Beautiful: a twofer!! More's the horror: he's speaking at a Catholic university. (Check the link if you want to see hypocrisy at its most fulsome.) Worst of all: he uses a teleprompter!!! Not making that up: they're on him for using a teleprompter. (Oh yeah, and he's overexposed. A president who exposes himself.)

It's one thing (or it would be, if we saw it) to criticize constructively, to disagree with policy, to say why, to propose alternatives. At some point (are we there yet?), when all they have is silly sniping and reflexive rejection, you'd think people would say, y'know, these guys are just being churlish children. Wah, wah, wah. They have nothing to say. Except crap like this.

I'd like to think that this sort of transparent desperation would marginalize that portion of the Republican party out of existence, and that saner and more helpful heads would prevail. I'd like to think that the public would see it for what it is: unable to accept that their core ideas led us to ruin, they strike back in the only way they know. Distraction, denial, demagoguery. I'd like to think that, like a yippy dog that nips at ankles, they'd be ignored into going away. But I doubt it. There seems to be total commitment to the idea that if they say outrageous things enough, over and over, drip by drip, in the dark cave in which they now live it'll grow into something. That, heard enough, their nasty nostrums will win people over. And, given our short attention spans and discomfort with difficulty, it could work.

It's so hard to gauge. Is the noise greater than the sound? Am I overly pessimistic? It's most certainly true that if/when it becomes clear that the Obama program is working, all these petty people will be seen for what they are. You almost have to admire their willingness to go all in, given the high chance of failure, leaving them high, dry, and bye. But I don't.

Still, I worry. In the desperation born of knowing they have no ideas or credibility, Congressional Republicans and their supportive screamers are fighting to the death. If Obama succeeds, they're reduced to nothingness. His failure is their only option (not the country's, of course. But that's of no concern to them). So they'll attempt to bring it about by claiming it's already happened, making up stuff, pouncing on unimportant things as if they matter, braying round the clock, hoping that their cynical view of the public is true, that people are stupid enough to fall for it, to give up before the finish line. To guarantee the failure that is their last-gasp hope.

And that is the true disgrace. Among those Congressional Republicans and their screaming supporters there's not a single one larger than himself. None willing to rise to the demands of the times, to what we might call greatness. Their only concerns are party and power. Country first, my ass.

[Update: here's the story on a Limbaugh story. Surprise!! Limbaugh got it entirely wrong. How long shall we wait for the correction?]