And With That, It's Over 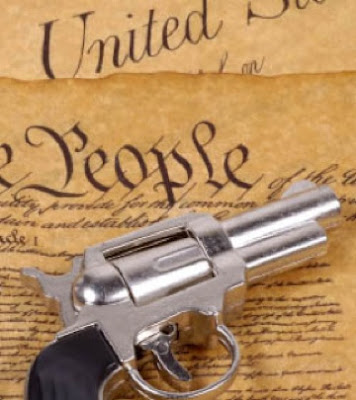 So the NRA succeeded in recalling, in Colorado, home of the Aurora mass murder, two Democratic state legislators who voted for (puny) gun restrictions. And that's that. Or, as Charles Pierce says:

... A few feet away stood Steven Martin, 53, a recall supporter with a Beretta handgun holstered on his hip. "It's a deterrent," he said. "I love my country."

A gun. Outside a polling place. I knew I missed something not growing up in Argentina.

Guns have won. Period. The people who make them have won. The people who sell them have won. The people who want to use them to shoot up elementary schools have won. Iowa's arming the blind. The NRA's fighting state laws to reduce the amount of lead in the bullets used for hunting because there's evidence that the lead in abandoned carcasses is leaching into the environment, and lead does very bad things to the body. We have decided to be an armed nation. And the next time some lunatic opens fire in a movie theater, it really would be nice if we could dispense with the maudlin national mourning pageants on cable-TV and admit that these are the kind of things with which we have chosen to live. It at least would be honest.

So we've gone from "a well-regulated militia" to everyone packing, everywhere. And any politician foolish enough to think that trying to moderate that in order to lower the incidences of mass killings or, as is a practically every-day occurrence nowadays, little kids blowing themselves away because their idiot parents left loaded guns around, is toast.

Okay, then. Exceptional America, the only "civilized" country that has made gunplay part of daily life, accepts the fallout as simply the price of doing business. If it's sort of inexplicable, if there's no reality-based reason for it, we now know for sure: it ain't gonna change. So, let's live with it. And, hopefully, not die from it. Case closed.
[Image source]