Finally They Said It 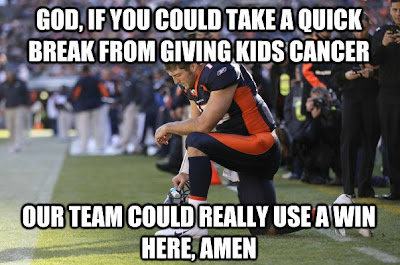 Well, of course it had to be said. What took them so long? Our president isn't praying hard enough over Syria. Because, well, it worked out so well when Bush did, over Iraq.


If President Obama is praying for guidance on how to handle Syria, he’s not doing it in church, where he has failed to set foot on more than five months.

The president, who on the rare occasions when he does show up in a chapel often makes a high-profile stroll with his family across Lafayette Park from the White House to St. John’s Church, hasn’t been to services since Easter Sunday, March 31.

There's so much wrong with this, there's not enough room here or anywhere to cover it all. Having just shown restraint on someone's Facebook page, in not pointing out the horror of a video about an inspiring little girl who died of cancer, and all the comments rejoicing in the wonderfulness of god, I guess I'm entitled, on my own blog, to, as is included in my blog title, restate the obvious.

First of all, if I'm trying to figure out a response to an impossible situation like Syria, I'm gonna go with expert advisers, not the guy who just allowed (or, since he's all-powerful and all-knowing, caused!) the gassing of a bunch of innocents (the lord giveth and taketh away); the guy who, as confirmed by our previous leader, talked that gullible slacker into starting a disastrous war on false information and with the then-and-now-obviously impossible goal of spreading god's favorite form of government across the Middle East, leading to hundreds of thousands of deaths and maimings, displacing countless people, and releasing hatred across the region like radiation from a broken nuclear plant (blessed be the name of the lord).

Second, despite ceaseless efforts of a formerly credible political party, we're still a couple of elections away from becoming a theocracy. We should be damn well happy if our president isn't praying for guidance (although, sadly, he claims he prays up a storm.) I mean, gods forbid, what if we had a guy or girl praying to the wrong god or gods, in the wrong way, with the wrong book, in the wrong house?

Third, although no religionist will agree, the idea of prayer is definitionally inconsistent with the idea of that all-knowing and all-powerful god, one who sees our lives in full before we're even born, one who has a plan for everything, and is perfect. He's gonna do what he's gonna do. And, as we've seen since the time of the bible, odds are it won't be pretty. If you think your prayer can change his mind, you must be inhabited by the devil.

Fourth, and far from finally except in terms of this post, there can be no truth greater than the evidence that prayer fails, over and over, countless times per day; that it's, at best, a way to make people feel better in the face of the impartiality of the universe (fair enough, that); a way to convince people there's a purpose for whatever horror they're facing, that they're okay in the eyes of the very god who brought the cancer to their child, sent the school bus over the cliff, invented arthritis and hemorrhoids, stood on the sidelines while millions of "his" people were gassed and burned. Sanctified Stockholm Syndrome. (I've written about prayer, in a real-world situation, before, and created quite a stir in the comments.)

In that Facebook thread, people testified to their inspiration by and admiration of the little girl who managed, because she'd been well-indoctrinated, to see her cancer as a gift from god. Me, I'd have been more inspired had the girl not been so tortured by an entity so sociopathic that he uses an innocent child's pain and suffering as a veiled threat written in flesh, and allowed to grow up and, maybe, find the cure for cancer. Unless, of course, god likes cancer too much, finds it a useful method of torture and intimidation, that he'll continue to be sure a cure eludes us.

So, no. Me, I'd hope our president was not praying for guidance, in this or any matter. Because it's plainly a waste of precious time.