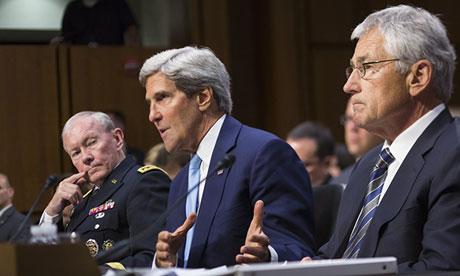 I saw some of John Kerry's testimony regarding Syria, and the most striking thing to me was the obvious discomfort (to say the least) evidenced by General Dempsey, the Joint Chiefs Chairman. At one point, Kerry asked him if he'd like to field a particular question, and he said, "Not really, Mr Secretary." It's pretty evident that the military isn't on board with President Obama's plans (if that's the word). In that regard, this opinion piece in the WaPo the other day, is pretty tough stuff, and hard to read; harder to fault:


A war the Pentagon doesn’t want

The tapes tell the tale. Go back and look at images of our nation’s most senior soldier, Gen. Martin Dempsey, and his body language during Tuesday’s Senate Foreign Relations Committee hearings on Syria. It’s pretty obvious that Dempsey, chairman of the Joint Chiefs of Staff, doesn’t want this war...

Dempsey’s unspoken words reflect the opinions of most serving military leaders. By no means do I profess to speak on behalf of all of our men and women in uniform. But I can justifiably share the sentiments of those inside the Pentagon and elsewhere who write the plans and develop strategies for fighting our wars. ...

They are embarrassed to be associated with the amateurism of the Obama administration’s attempts to craft a plan that makes strategic sense. ...

... They are outraged by the fact that what may happen is an act of war and a willingness to risk American lives to make up for a slip of the tongue about “red lines.” ...

Our people lament our loneliness. Our senior soldiers take pride in their past commitments to fight alongside allies and within coalitions that shared our strategic goals. This war, however, will be ours alone...

Soon the military will salute respectfully and loose the hell of hundreds of cruise missiles in an effort that will, inevitably, kill a few of those we wish to protect. They will do it with all the professionalism and skill we expect from the world’s most proficient military. I wish Kerry would take a moment to look at the images from this week’s hearings before we go to war again.

There's much more in the article. Worth reading.

I can't defend Obama in this, really, and have said so. But I'll say this much: as Congressional Rs line up to vote against war, showing their desire to stick it to Obama in all things supercedes their desire to be tough guys, here's a solid bet -- had President Obama announced he doesn't plan to do anything, those same Rs voting "no" would be screaming to the heavens that Obama is weak and giving comfort to our enemies.

Badly mishandling it he may be, but I think he's honestly trying to thread an impossible needle; while Rs are simply, and as usual, playing whatever game they think will hurt the president the most, irrespective of what's right. Which, in this case, is impossible to know.