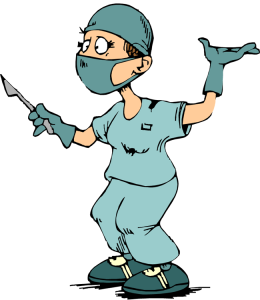 This is really scary, frustrating, disappointing, and totally in synch with what I've been predicting, and observing first-hand. I don't think there's public access to the article, so here's the summary, with no link. It was from an article on Medscape, and refers to a study published in the Annals of Surgery (Annals of Surgery. 2013;258(3):440-449). The title of the paper is "General Surgery Residency Inadequately Prepares Trainees For Fellowship." That really says it all. And if they ain't prepared for fellowship, they ain't prepared for you. I added the bolding:

Results: There was a 63% response rate (n = 91/145). Of respondent program directors, 21% felt that new fellows arrived unprepared for the operating room, 38% demonstrated lack of patient ownership, 30% could not independently perform a laparoscopic cholecystectomy, and 66% were deemed unable to operate for 30 unsupervised minutes of a major procedure. With regard to laparoscopic skills, 30% could not atraumatically manipulate tissue, 26% could not recognize anatomical planes, and 56% could not suture. Furthermore, 28% of fellows were not familiar with therapeutic options and 24% were unable to recognize early signs of complications. Finally, it was felt that the majority of new fellows were unable to conceive, design, and conduct research/academic projects.

Back in my Surgeonsblog days, when I'd write about this I'd always get some pushback from med students: surgeons like you think you have to torture people to teach them; you're inhumane; you're locked in the dark ages. Well, maybe so. Maybe you don't have to treat residents like animals; but if you limit their hours the way it is now, this is the price you pay.

There's no way I could now live through even a couple of weeks of the kind of training I had back then; but back then, even when I was tired, I never doubted that the hours I was spending were necessary. As a resident, the easy rotations were the ones where I got out of the hospital every other night for maybe eight hours. On the rest, it was every other weekend, starting sometime Saturday afternoon and ending around 4 or 5 am Monday. As chief resident on the trauma service, I left the hospital for one night in sixty days; and that was because my attending was a good enough guy to cover for a few hours on my anniversary.

In my view, the number one thing that makes a good surgeon is commitment. Well, of course, and having a certain level of skill and knowledge. And judgement. And maybe even empathy. (Yes, believe it or not: empathy.) You don't get a sense of commitment by bugging out when your shift is over. And if your teachers don't pound you once in a while if you were sloppy, or didn't think things through, or didn't follow up when you should have; if, when you screwed up like that they didn't hang you out to bleed in front of your peers, maybe you might not ever fully internalize the implications of the trust your patients place in you.

It's just the way it is: surgery is different. There are no hiding places in the operating room; no way to have the patient come back next week after you've had time to think, or look stuff up, or just hope it'll all will go away. Which it might, if it's not surgical.

Surgeons who trained in my day -- and there's no way to say it without sounding self-serving and self-congratulatory -- are different, too. I fully acknowledge I let myself burn out too young, because I hardly took time off, I made rounds several times a day, day on or day off; I came in early and stayed late, worked over lunch to fit a woman in who was worried about a mammogram report, even though it really wasn't a true emergency. My younger partners didn't. I'd see a woman with a breast lump, take a needle sample, drive it to the pathology lab over the "lunch hour," look at it with the pathologist, and call the lady back the same day. Have her come in at the end of the day if it showed cancer, so we could talk about it right away. I don't think you'll find many -- or any -- who'll do that nowadays. Not bragging; just making the point that there's old-style commitment, and there's today.

I'll hasten to add: I know young surgeons who are very committed to their patients and to providing high-quality care. Nor do I claim that the newly-minted surgeons are satisfied with or happy about the inadequate training they've received. But I've also seen many a good young surgeon bail out of the rigors of a general surgery practice because it's too hard. Take a job as a hospitalist with regular hours; limit their practice to, say, breast care only, or bariatarics. Their training didn't require the hours that practice does. Us old guys, well, it was easier in practice than in training.

On the other hand, they will probably stay in the game longer than I did, because they won't be exhausted all the time. If they ever learn how to take out a gallbladder, or operate on a tough case, it should be fine.