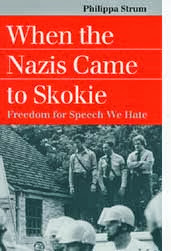 Here's my pen-penultimate column in our local newspaper. Two more to go, and then I bail out.

Among the many baffling bogglements of American politics is the derisive disregard held by most Republicans – lovers of liberty, of small government, of “Don’t tread on me,” of our constitution (which, inconveniently, includes The Bill of Rights) – for the ACLU. The “American Civil Liberties Union.” Not the “Big Government Union;” not “Americans for Ignoring Your Rights, “or the “Let Government Run Rampant Coalition.” It’s an outfit concerned about preservation of the freedom of individuals caught in the clutches of governmental or private attempts at overreach, and guarding against illegal discrimination.

So why the reflexive rejection of that organization by the very people who claim to have a virtual monopoly on its central concerns? It’s liberals, their leaders and media idols love to declaim, who hate the Constitution.

Not that it’s a unique disconnect. The Tea Party, created and financed by the most wealthy and powerful, mendaciously manipulated by their wholly-owned and propagandistic “news” outlets, and designed specifically to foment resentment among regular folks for the very things that regular folks actually need, while ignoring the fact that they’re obligingly facilitating the takeover of government by the most regressive and oligarchical and un-regular-folks elements, is proof of how easy it can be to manipulate people into working against their own interests. (Phew. What a sentence! Passed it like a kidney stone.) The point: lots of people seem unable to recognize when they’re being deceived by those who absolutely do not have their best interests at heart. The ACLU, on the contrary, does.

Not known for his sense of irony, Rush Limbaugh, who considered the ACLU some lefty-commie-America-destroyer, happily accepted their help in asserting that his privacy had been violated when his illegal trafficking in prescription drugs was revealed. And why not? Protecting the individual, no matter who, is precisely their mission.

Advocating civil rights isn’t for the easily cowed. Pretty much by definition, an organization willing to stick its neck out the way the ACLU does is asking for controversy. For one important thing, goring is in the eye of the begored. If you never much liked gays, for example, you’re not going to be all that enthusiastic when the ACLU stands up for them. Nor, if you’re for biblical theocracy, are you likely to be thrilled when they argue for the right to build mosques. But if we are indeed a nation of laws, and if we do indeed give more than lip service to the other nine amendments (the second, of course, goes without saying. Did you know the ACLU has expressed reservations about recently proposed Democratic gun restrictions?) and if we acknowledge that government has a tendency to abuse its power (what is the Tea Party if not a proclaimer of that?) then having people willing to take heat from all sides in the name of the law and of fairness is something for which we should all be grateful. In a nation that places its constitution deservedly highest among documents, it’s the last thing you’d expect to break along party lines. But like so many things in America nowadays – even science! – it does.

Some may recall that, in the 1970s, the ACLU supported the right of American Nazis to march in Skokie, Illinois, a town with a large Jewish population, many of whom were Holocaust survivors. In doing so, the ACLU lost many of its Jewish supporters; but because civil liberties are civil liberties, even when disagreeing with the exercisers thereof, they did it anyway. Growing up in a Jewish family, I recall heated discussions among my parents and their friends at the time; and I remember being proud that my mom and dad argued, strongly, much as they hated the very idea of American Nazis, that the ACLU was right.

The fact is, Republican animus isn’t much of a mystery: the current leaders of that formerly honorable conservative party don’t actually believe in democracy anymore. Thus the widespread suppression of those voters with whom they disagree, and the impenetrable, conspiracy-based refusal to accept election results. Twice. Nor do they value civil rights or religious freedom, except as they apply to themselves. Thus, their transcontinental efforts to embed biblical law and homophobia into our legal codes; their attempts to expunge science from classrooms; their claims of religious persecution despite overwhelming evidence to the contrary, not the least of which is the radical fundamentalism of nearly all their recent presidential candidates. The ACLU demands consistency in following the law. Isn’t it weird that today’s Republicans don’t like that?

Special bonus for blog readers: watch this and know why we need the ACLU.