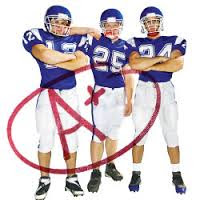 Here's the latest iteration of my Sunday column in our local newspaper. Small potatoes, compared to the other issues at hand, but what the hell.

I went to a small college. Now coed and doubled in size, at that time it was all men, and totaled a thousand students. We played Division III sports, and weren’t terrible in any of them. For four years I played rugby (a club sport), discovering it after my first and only year playing football there.

The school has produced a couple of pro athletes, but for the most part sports were viewed as a way – a darn good way -- to enhance the educational experience. Most guys played some sport or other, if only intramural; but there were no athletic scholarships, no courses designed for jocks, equally high academic standards for all. Those who played varsity sports (even football!) took the same classes as everyone else and, in fact, were typically in the upper ranks of scholars. And they were my friends, so, as opposed to bigger schools where prime beef athletes are separate and unequal, rooting for them was personal. They went on to every occupation imaginable, including professors, clergy, contractors, soldiers, astronauts (a classmate fixed Hubble!), lawyers, and the occasional physician.

As it frequently is, the NCAA has been back in the bad news, with silly sanctions and pretenses of maintaining standards while claiming some imaginary level of integrity. I enjoy watching Division I college sports, especially basketball and football, but I don’t kid myself that I’m looking at what their coaches cynically refer to as “student athletes.” Those kids, on the men’s side anyway, and in the top divisions for sure, aren’t there to become educated, except by accident or by virtue of uncommon desire and effort. They’re there to make money for the schools, and they do. Lots of it. (Exhibit A: Husky Stadium. Exhibit B: that enormous Duck palace, fully funded by fancy shoes, granted; but a mammoth monetary monument to skewed priorities.) So why not cut the cozenage and give players their due?

Division I schools should be honest with themselves, their alumni, and, most importantly, their money-sport athletes. “You’re here to play ball,” they should tell them. “If you want an education, we’ll do what we can to facilitate that. But if you only want to play your sport, sign a few balls, that’s cool, too. You get free room and board, a monthly stipend of (market price), and all you have to do is play the game and avoid being convicted of too many misdemeanors, no more than a couple of felonies.” Because at that level, sports are not about scholarship. With its recruiting violations, academic scandals, abusive coaches (recently defended, testosteronically, by Fox “news”), double standards for athletes, cover-ups, wrist-slaps and posturing, the NCAA is an unfunny joke. Get rid of the phony academic rules, and make it a junior professional sport: pay ‘em the going rate, expect a certain level of performance, separate it entirely from the halls of academe, which it already is, except in name: a revenue stream, period. Would alumni care?

For the kids who don’t make it into professional sports, it’s the worst of all possible worlds: studies were a pretense, designed to skate through meaningless requirements, leaving them with nothing gained from their time at school. So how about this for a fair deal: play ball for us, do your best, and if you don’t make it as a pro athlete, come back and we’ll give you that education, on the house. Don’t let one distract from the other. First time around, their job is financial fodder, glorified fundraisers, conduits for considerable cash into collegiate coffers. If and when they’re ready, they can be students; they earned it.

We’ve got way bigger problems in this country than cleaning up the corruption of the NCAA. It doesn’t keep me awake the way regressive Tea Party obstructionism and coldhearted economic amnesia in Congress do (and now, Syria). Maybe it’s that it’s a symbol – and, unlike the bigger stuff, an easily fixable one – of the larger issues of our society. Like so many others of our citizens, so-called student athletes are being hoodwinked (with too-perfect symmetry, as Fox “news” cheerleads) by a small number of avaricious and powerful people into thinking they’re acting in their own best interest, when, in fact, they’re doing the opposite. Sure, the really gifted ones will likely become millionaires. But the majority, who won’t, will realize only after it’s too late that they signed on to the wrong priorities, and ended up with nothing to show for it. It’s muscle-bound political metaphor.