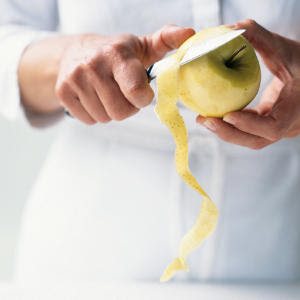 I have occasionally noted that there remain a few sensible Republicans. Within that vanishingly small group is Bruce Bartlett, Reagan's chief economic adviser, to whom I've referred in the past. He keeps pouring the cold water of truth on the hot fire of right-wing rhetoric. Recently, titled "Reagan's Tax Increases," there's this:

It may come as a surprise to some people that once upon a time in the not-too-distant past Republicans actually cared enough about budget deficits that they thought raising taxes was necessary to bring them down. Today, Republicans believe that deficits are nothing more than something to ignore when they are in power and to bludgeon Democrats with when they are out of power.

That followed a statement, illustrated below, that made reference to:

the many tax increases supported and signed into law by Ronald Reagan, which eventually took back half of the 1981 tax cut 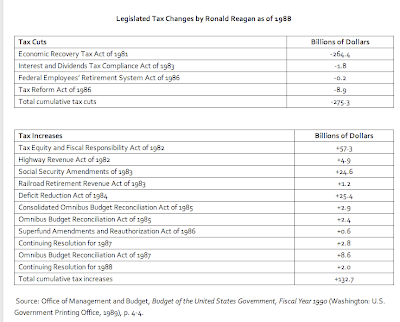 Some things in politics are simply so obvious that they ought not need stating. For example: to achieve sustainable fiscal sanity, we'll need a combination of tax hikes and spending reduction. Or this: health care reform will eventually require some form of public option that does not rely on insurance companies, and it will also need to include some sort of prioritizing of spending. Or this: lasting peace in the Middle East will include the relinquishing of some settlements and territory by Israel and the sharing of Jerusalem by the Palestinians.
What is in question is whether there will ever be politicians with the brains and guts and honor to say what does need to be said, and to do what needs doing. Sadly, it doesn't seem to matter that we have a president willing and able. He seems drowned in the din raised by the RWS™ and smothered by the cynicism of the current Republican leaders and the teabaggers to whom they pander. Truth and sanity have no place at their table. And as for the Democrats, strength and bravery have none at theirs.