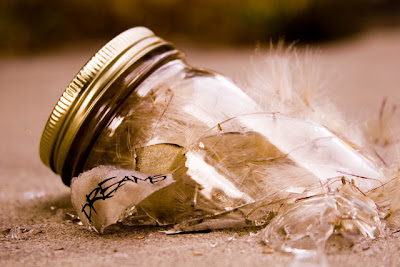 Sarah Palin, to the great guffaws and hoots of the misled, likes to ask, referring to Obama supporters, "How's that hope-y change-y stuff working out for ya?" Funny material. A peak experience for teabaggers, that. Those stupid liberals, wanting to believe things might change.
Amazing. The prospect that in our corrupted and hyper-partisan political system change is impossible brings great joy to these people. In a spasm of retrograde ejaculation, the Palinized populace express their hilarity over the idea that, even when a president is elected with overwhelming approval, and when Congress has close to the largest Democratic majorities ever, a group of negative, consensus-hating, unserious, hate-bating Republicans and their deluded supporters can see to it that nothing changes. Mired, stagnated, bound down by superficial thinking and deliberate disinformation, our country is shown incapable of change, even in the face of the most disastrous -- maybe unprecedented -- combination of existentially threatening problems in need of responsible and consensual solutions -- and Sarah Palin and her like-mindless pack think it's hilarious.
To these proudly stupid, deliberately fact-free, professers of love of country, this failure, brought about by them, is good for a bunch of yuks. High fives for low lifes.
Might they stop for a micromoment, take a brief pause from their destructive know-nothingness, and consider what it really is they're saying, laughing about, taking pleasure in? That a majority of voters, for a moment, against all odds and with history lined up against them like waves of Redcoats, believed things might change for the better in our politics. That people actually suspended cynicism long enough to vote for change in the poisonous politics that has grown from more than disturbing, during the Clinton impeachment era, to the level of threatening impending failure of our republic in the last ten years. That it was believed possible we might still be able to form a functioning government based on a sense of mutual need, lubricated by willingness to rise above purely political obstructionism, for the common good. Funny, huh? It's a regular thigh-slapping riot.
The real joke is that none of those hopefuls anticipated the over-arching cynicism of the minority party, the power of right-wing news media willing to lie openly (the same media that created Sarah Palin out of the wastelands of Wasilla, to advance their selfish agenda). Few, if any -- certainly not me -- imagined that in such dire times, with two wars, a failing economy, years of ignoring sensible energy policy, health care on a path to collapse, the entire right wing would unite to maintain their failed status quo; that their profoundly self-interested and deeply unpatriotic propaganda would succeed in convincing so many that attempts to save the country -- imperfect as they might be -- were, quite literally, treasonous. I'm hardly a Pollyanna, but I simply couldn't imagine our country was so stupid, so easily duped, its hates and prejudices so easily preyed upon. So goddam selfish. So fucking selfish.
Great. Take it back, teabaggers. Turns out, it was yours all the time. Yours, and the guys who led the country over the cliff in the first place. Good job. Grab your jumping clothes, follow Sarah and Glenn and Christine and Sharon and Michelle and John and Mitch and Rush and Rand and Joe and Bill and Bill and Andrew and Dick and Dick and Dick and Ann and Michael and Laura, and have yourselves another laugh on the way down.
I wonder if Sarah and enough teabaggers will be alive in, oh, thirty years let's say, to answer this one: So how'd that hate-y lie-y stupid-y stuff work out for all of us?