No News Is Good News

(I wrote this one a while back, which explains the somewhat old news.) 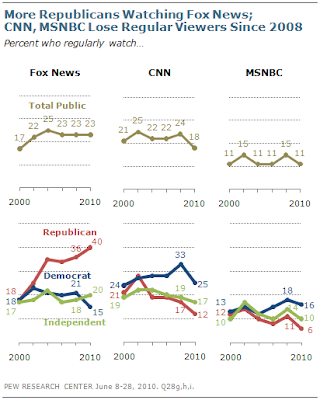 Pretty dramatic. The meaning, as this article concludes, is exactly what has seemed obvious for a long time:

In other words, Democrats and Independents have changed their viewing habits only slightly while Republicans have flocked to Fox and dropped both CNN and MSNBC in droves. Back in 2000, it turns out, the viewing habits of all three groups were pretty similar. Since then, as Fox has steadily amped up its conservative branding, conservatives have decided that's all they want to hear. The echo chamber must be getting pretty deafening over there.

I've said, because it's true, that a fundamental difference between (today's) liberals and conservatives is that the latter seem to need constant reinforcement of their beliefs, and reject any fact-based threat to them. While not, I suppose, a universal truth, it most certainly applies to people of teabagging mindset. In droves.

There was a time, I admit, when I watched MSNBC religiously, for maybe a year. Then I tired of it. I lost interest in hearing the same people predictably say the same things, superficially, over and over. The loudness disturbed me, as did the uniformity. I realized I wasn't learning anything new. So I turned to the intertubes where the cacophony is deep and broad, but where, between the extremes of both sides there are sites full of thoughtful discussion and insight, by smart people with inquisitive minds.
I haven't watched MSNBC for over two years (although I look at the occasional clip, on the net, of Rachel Maddow, whom I admire for her intelligence, factuality, and willingness to engage fairly her opposition). We know from studies to which I've referred that this is much more typical of the liberal mind than the conservative. Maybe it wasn't always thus (although why is it that challenging beliefs and prejudices, exposing people to a broad range of ideas is characteristic of something we call "liberal education"), but the combination of blatant partisanship, deceptive techniques of manipulating the news, and rising viewership at Fox "news" speaks loudly (by which I mean LOUDLY) of where we are today. Debunked claims, exposed untruths, blatant insanity not only don't turn people away, they attract them like, well, you know which to you know what.
[Need I say, for the six hundred and fiftieth time, that I don't reject conservatism per se. In many things, I share it ("it" being elusive, nowadays.) It's the Foxobeckian and RWS™ version of it, consumed by hate, bigotry, and aversion to comity, the emptiness of discredited ideas, the cynical falsehoods and conspiratorial manipulations that I reject and see as eating us alive. Other than that, no problem have I.]
There's nothing to do about it. Minds can be made up, but not remade, and there's nothing (that we know of) illegal about a billionaire with a destructive mission buying a network and several newspapers and paying employees to push political falsehoods. It's depressing that it's so successful, that as a people we've become so willingly susceptible to it. At this point the best to be hoped for is that when, once again, the conservative fantasies become law of the land and, as has happened every time, the economy is wrecked while the rich get richer, there'll still be time to save it one more time.
Somehow, though, I doubt it. This time around it went too far toward irreparable; and yet the Rupert Murdochs of the world, who gained the most from the debacle and who had the most to lose from the repair work, were once again able to convince their teabagging sheep that up was down, day was night, wrong was right.