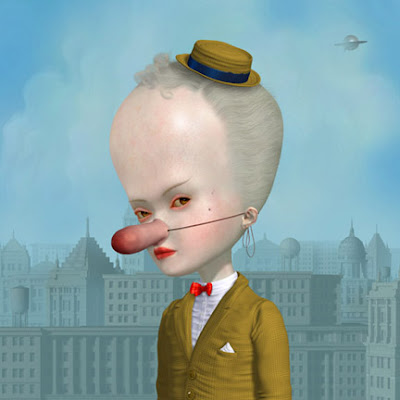 The teabagger-endorsed candidate in my congressional district has a real chance of winning, against a pretty mainstream and fairly thoughtful Democrat. In his latest ad, he says he wants to lower taxes and balance the budget. Cool. With a deficit of over a trillion, which would go up with further tax cuts, that's a lot of spending reduction. How would he do it? Doesn't say. Won't say. Can't say.
And so it is with all the darjeeling darlings. To a person, it's tax cuts and balanced budgets (more often than not with anti-gay, anti-Muslim, birther and hyper-religious seasoning tossed in for the hungry), while refusing to answer questions of how or where. This is not serious policy. In a plane of existence in which voters were something other than just mad, where they demanded answers not just anger, none of these Earls of Grey could have won nominations. They'd be laughed off the stage, told to come back when they have a clue. But that would be very, very elsewhere. France, maybe? A dimension far, far away.
Put more colorfully than I might have, but otherwise entirely congruent with my view of the entire"movement," (in the sense of, well, you know..) this says it well:

O'Donnell is a creature of an age in which politics have no meaning beyond performance art. She is the Creature from the Green Room, with no apparent public career beyond being available whenever some teenage booker from the cable shows needed someone to say something reliably stupid. ...

Her résumé is so thin as to be opaque, and a lot of it seems to be a lie. She seems to be something of a deadbeat, and "U.S. Senator" seems to be her idea of an entry-level position. This morning, she stands one step away from the job.

She is what politics produces when you turn it into a game show and the coverage of it over to a generation of high-technology racetrack touts. She is what you get when political journalism reduces politics to numbers on a scoreboard, divorcing it from the real-world consequences of what are increasingly seen as cute little eccentric decisions.

We're in the age of politics as aggrievement and accusation, of substituting pouts and provocations for policy. In times that demand seriousness from all parties, one has abandoned it entirely, to the delight of -- at the behest of -- its supporters. (Nor do I have a heck of a lot to say for the weak-kneed congressional dems, afraid, evidently, to do the most obvious -- and, ironically, poll-supported -- of tax hikes. Stupid meets pathetic. Equals screwed.)
When Glenn Beck and Sarah Palin are the dominant influences of an entire movement and what's left of a once-serious national party, we're in indescribable trouble. For what they are is vapid and vaporous. They're playing at it for their own jollies, the adulation, the money. They're traveling salesmen, except they have no product. Name a serious proposal either has put forward, policy-based, workable, thoughtful. When has either come up with anything other than rhetoric, appealing to fear, the paranoid? (Turning it over to God doesn't count. He's not a registered voter.) When, for that matter, has any of them submitted to legitimate questioning at all? Simple Sarah recently said it plainly enough, for those who still think Fox is fair (but we know about teabaggers and fact, don't we?): just "speak through Fox "news.""
I don't have a problem that my country produces such people: what kills me (figuratively only, so far) is the degree to which everyone else has taken their bullshit as something meaningful. (And, of course, the degree to which our media, failing, lazy, negligent, keep it frontal and central.) It's nothing but noise. It's fantasy. It's nasty and crazy. It's not helpful. It has nothing to do with lawmaking and problem-solving.
Mad? All right. Don't like health care for more Americans, don't like rescuing the auto industry? Fine. Suggest something else. Don't want to pay taxes? Me, neither (except that I sort of like roads, cops, the occasional aircraft carrier driving by my house, and the FDA.) So come up with an alternative. Tell me what you'll cut, and what you think the consequences will be. Present me with numbers that add up to zero deficit, and show your work.
Naw, forget it. Turns out you don't need to. Say the magic words, and the teabaggers will call you a hero, carry signs for you, and follow you off the cliff. For, to them, it's about pitching forks, not pitching in. To them, it's enough to be angry, to carry signs. To have ideas that fit on signs. That their chosen leaders provide no solutions isn't a failing.
It's a feature.