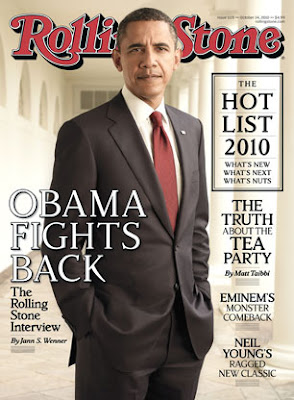 There's a great interview of President Obama coming out in Rolling Stone. It contains such gems as this, from our America-hating, foreign, Muslim-in-Chief, speaking of when Bob Dylan played at the White House:

Here's what I love about Dylan: He was exactly as you'd expect he would be. He wouldn't come to the rehearsal; usually, all these guys are practicing before the set in the evening. He didn't want to take a picture with me; usually all the talent is dying to take a picture with me and Michelle before the show, but he didn't show up to that. He came in and played "The Times They Are A-Changin'." A beautiful rendition. The guy is so steeped in this stuff that he can just come up with some new arrangement, and the song sounds completely different. Finishes the song, steps off the stage — I'm sitting right in the front row — comes up, shakes my hand, sort of tips his head, gives me just a little grin, and then leaves. And that was it — then he left. That was our only interaction with him. And I thought: That's how you want Bob Dylan, right? You don't want him to be all cheesin' and grinnin' with you. You want him to be a little skeptical about the whole enterprise. So that was a real treat.

At the end of the interview, the President had this to say:

One closing remark that I want to make: It is inexcusable for any Democrat or progressive right now to stand on the sidelines in this midterm election. There may be complaints about us not having gotten certain things done, not fast enough, making certain legislative compromises. But right now, we've got a choice between a Republican Party that has moved to the right of George Bush and is looking to lock in the same policies that got us into these disasters in the first place, versus an administration that, with some admitted warts, has been the most successful administration in a generation in moving progressive agendas forward.

The idea that we've got a lack of enthusiasm in the Democratic base, that people are sitting on their hands complaining, is just irresponsible.

Everybody out there has to be thinking about what's at stake in this election and if they want to move forward over the next two years or six years or 10 years on key issues like climate change, key issues like how we restore a sense of equity and optimism to middle-class families who have seen their incomes decline by five percent over the last decade. If we want the kind of country that respects civil rights and civil liberties, we'd better fight in this election. And right now, we are getting outspent eight to one by these 527s that the Roberts court says can spend with impunity without disclosing where their money's coming from. In every single one of these congressional districts, you are seeing these independent organizations outspend political parties and the candidates by, as I said, factors of four to one, five to one, eight to one, 10 to one.

We have to get folks off the sidelines. People need to shake off this lethargy, people need to buck up. Bringing about change is hard — that's what I said during the campaign. It has been hard, and we've got some lumps to show for it. But if people now want to take their ball and go home, that tells me folks weren't serious in the first place.

If you're serious, now's exactly the time that people have to step up.

I'm sure the RWS™ will take him to task, finding ways to make everything he said into proof of his Muslim secretness and destroying Americaness. But the whole interview should be read by everyone, especially his detractors. Were they to do so with an open mind, they'd see a deeply thoughtful and intelligent man, trying to make the best among a bunch of complex to the point of impossible choices. And whereas they are certain to suggest he's blaming everything on George Bush, there are certain facts that can't be screamed away: he DID inherit a mess -- more of a mess than any president with the possible exception of FDR. But FDR fixed the economy, in part, by entering a war. BHO came to two wars which were wrecking the economy and which simply couldn't be fixed by wishing them away. Easier to start a war than to end one, although it's evidently not that hard to start one and ignore another.