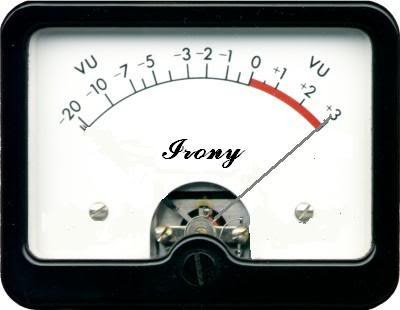 Everywhere you look there are ironies, and it's hard to say which are the greater.
We're about to throw out of office the people who tried to fix the problems caused by those we're sending back in.

(For even more irony, read the "Mood ring" post by the author of the above cartoon [right below it], the inimitable Tom Toles.)
We've "liberated" (or whatever it's been) millions of Muslims; yet the people in armchairs who claim the action as their own, who puff up and scream that those who opposed it are unAmerican, would deny freedom at home to all of Islam. Thousands are dead, tens of thousands wounded, trillions spent in the name of planting democracy thence, only to uproot it hence.
We've asked our warriors to die for people over there that we (and by "we" I mean teabaggers and RWS™) don't want to live with here.
Over the seas, we hope -- we need -- that people in Afghanistan and Pakistan and Iraq and Iran rise up against those who preach fear and hate and violence. At home, we rally at the feet of demagogues whose cynical manipulations of fear and hate (and undisguised calls for violence) are amplified in unprecedented synchrony by non-stop right-wing media who claim the mantle of country-love while disparaging and ignoring the most essential tenets of it. Like respect.
I'd call that ironic, all right.
Well, perhaps these people traditionalists. After all, demagoguery and fomenting of hate for minorities has a long -- if largely, until now, unsuccessful -- history in this country. In a recent column, Nicholas Kristoff described it this way:

Suspicion of outsiders, of people who behave or worship differently, may be an ingrained element of the human condition, a survival instinct from our cave-man days. But we should also recognize that historically this distrust has led us to burn witches, intern Japanese-Americans, and turn away Jewish refugees from the Holocaust.Perhaps the closest parallel to today’s hysteria about Islam is the 19th-century fear spread by the Know Nothing movement about “the Catholic menace.” One book warned that Catholicism was “the primary source” of all of America’s misfortunes, and there were whispering campaigns that presidents including Martin Van Buren and William McKinley were secretly working with the pope. Does that sound familiar? [Yes, it does.]

It may be a fine tradition -- perhaps even evolutionarily sound -- but it doesn't make me feel any better. Back then, it was the occasional pamphleteer. Now, it's pervasive and coordinated right-wing screaming.
And, in perhaps the greatest irony of all, the triumphalists are complaining that, in his low-point end-of-combat speech on Iraq, Obama didn't praise Bush enough; when, in fact, he gave them more than they deserved-- just as he did in not pursuing war crimes -- in pretending that everything was fine. So fast is history being rewritten that the ink is smearing. While, in a perfect circle of ironies, the screamers count on the shamefully short memories of Americans, we've already forgotten how the war began, was carried out, and descended into horrifying debacle. "The surge worked," we are being told, now as before, and for that we should haul George Bush upon our shoulders and march him into the history books, his greatness pristine as cleared brush.
The fact is, Obama effectively concluded "enough is enough." Couch it any way you want: it was time to end the endless horror to whatever extent possible, declare stalemate, and (sort of) leave. After all the blood, money, and time, with no actual endpoint, it's finally up to Iraqis to solve Iraq. Frank Rich, in one of his better columns, quoting Andrew Basevich, a West Point grad whose son died in Iraq, captures the irony far better than I:

“The surge, now remembered as an epic feat of arms, functions chiefly as a smokescreen, obscuring a vast panorama of recklessness, miscalculation and waste that politicians, generals, and sundry warmongers are keen to forget....

“...common decency demands that we reflect on all that has occurred in bringing us to this moment.... the whitewashing of our recent history is well under way. The price will be to keep repeating it.”

He's plenty hard on President Obama for abetting the whitewash. And the RWS™ have the temerity to complain that not enough praise was lavished.