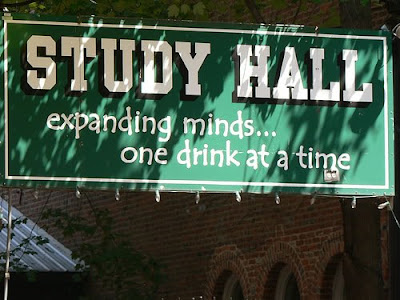 Couple of interesting data points on the endless and ever more pocked path to truth. I like these studies, naturally, because they confirm what I believe. And what has politics become, if not the reinforcement of one's beliefs? (Mine however, as distinct from those of the RWS™ and the teabaggers who horde what they hawk, have the support of facts, of course. Like these:)
First, from a non-profit organization in Iowa supporting "public affairs journalism." (The weakness of the study is only the short time-frame over which it was carried out.) Guess what? Same-sex marriage hasn't destroyed "opposite marriage." The article is titled, unconfusingly enough, "Gay Marriage Causes No Harm To Traditional Marriage, Study Finds." If anything, you might conclude it strengthens it:

The angst over marriage in Iowa comes after a year in which the state of marriage has made a turn toward statistical bliss: more people got married and fewer split up. Divorces declined to 7,286, to lowest per capita level since 1968, according to 2009 provisional and historical data from the Iowa Department of Public Health.

Also from the article:

The IowaWatch.org study found similarities range from the way men and women often view marriage to the more mundane tasks of married life, such as doing yard work. Like people in traditional marriages, same-sex couples also talk about raising children and shielding them from the verbal slings of peers, the stability and unit-strength of a family and the value of loving relationships among parents and children, as well as legal necessities and financial security.

The Iowa Supreme Court ruling that effectively legalized gay marriage was unanimous, but the opposition has persisted, because it is fueled by fears that that the family, the bedrock of American society, is at stake.

[...] In sharp contrast, married gays often depict a lifestyle and relationship that seems suburban stable, only now they have a marriage license like other couples.

“Not much has changed,” said Ledon Sweeney of Iowa City, who married his partner of 12 years. “We live pretty boring lives. We go to work; we mow our lawn, we pay our mortgage, and we go on vacation if we can save enough money.”

How could anyone who actually thought with their brains instead of their holy books be surprised?
Now comes the one sure to give paws. If it didn't originate from some sort of online dating service, I'd compare it to stone tablets on Mount Sinai. Ready? Check out this chart: 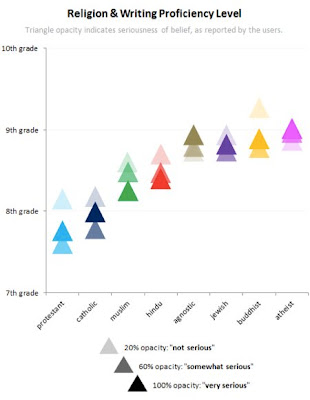 Okay, it's a little challenging to interpret (not to mention see), with those triangly things and all. But here's the deal: it's about reading and writing skills as compared to various religions. The "opacity" of the triangles indicates "seriousness" of the beliefs. So. The reader may discern for her/himself what it says. To me, there are no surprises.
On the other hand, I don't suppose people filling out personal data for online dating are necessarily a representative cross section, or even honorable in the biblical way (most don't, one assumes, stone disobedient children to death, for one thing.) So, never mind. Try this one:

What this research underlines is that we push back against threats to our world-views by reasserting structures of meaning with which we are comfortable.

Maybe it explains teabaggers and the non-stop conspiracy theories of the right wing. So flummoxed are they over the fact that "their" country would have elected a black guy as president; so discordant is it to see a whole family of them in the White House; so horrible is the concept that to get the things we need from government we have to pay for them; all of these blows to their most central idea, handed to them on tablets by Lord Ronnie, that the less we do for others, the less we pay in taxes, the more rewarded we'll be -- it's all but emptied their minds. With what to fill it? Comfort: There's nothing wrong with what we've believed. It's them guys that are wrong. There's a plot against us, a very very nefarious plot. God is on our side. We love America, so they must hate it.
Don't you love science?