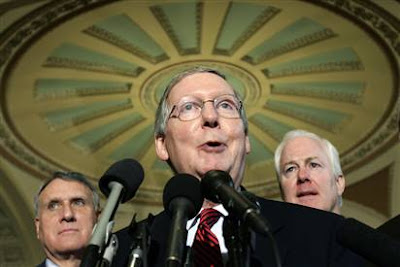 Seems the only person who claims John Kyl and the rest of the Republican obstructionists of START have America's interests at heart is Barack Obama. The rest, including the most credible conservatives, are mystified. As well they should be:

In an attempt to rally bipartisan support for the treaty, the White House has enlisted the kind of GOP foreign policy wise men that Lugar exemplifies -- among them former Secretaries of State Henry Kissinger and James A. Baker. But they have had no success with members of their own party, and it has left them scratching their heads over the source of the GOP opposition.

"It's not clear to me what it is," said Brent Scowcroft, a former national security adviser to President George H.W. Bush who noted that this START treaty is not very different from previous ones negotiated and ratified under Republican presidents. "I've got to think that it's the increasingly partisan nature and the desire for the president not to have a foreign policy victory."

This is no small observation. Scowcroft, one of the more respected Republican voices in the national security establishment, is noting, on the record, that he suspects his own party is putting their partisan interests above the needs of the nation. The underlying point of an observation like Scowcroft is that he sees his Republican Party putting petty partisanship above national security.

We're in the process -- to use a phrase that was given the Foxobeckian distortion treatment recently -- of handing back the keys to the guys who drove us off a cliff ("into a ditch" is way too mild.) In all things -- including national security, most amazingly -- they have no interest in the national interest. Only their own. It couldn't be more clear, or more sickening. Respectable Republicans who speak out (and there aren't many) are tossed overboard.

What will always remain unclear -- except, perhaps, to galactic historians digging through the rubble -- is the self-destructive and delusional mania of the voters who returned them to the front seat.