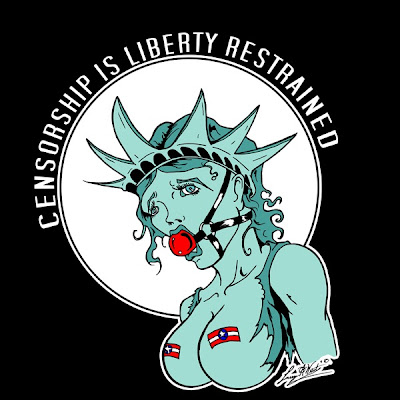 I don't much care what Bill Donohue says, other than the fact that it's pretty amazing he's the spokesman for anyone, let alone a religious group. So the fact that he doesn't like a particular piece of art amuses me at worst.
What's not funny, though, is that we've now undeniably entered the age of right wing censorship and fear-mongering. Under fear of defunding by our new destructors, the National Gallery of Art (which I just visited and which is a treasure) has removed a controversial work. What's next can't be too hard to figure out, even for teabaggers. But they, of course, love everything about it. The bullies are back in charge.
I'm no art critic, but I did find this counter-view compelling.

Well, I'm a Christian and far from feeling insulted or injured or assaulted, I saw something as raw as it was orthodox. The whole video incorporates the image of Jesus as a dying, tortured man like those with AIDS: "unclean" as the audio shrieks over the image, rejected, covered by insects. It splices that image with grotesque attempts to sew a loaf of bread back together, to sew a human being's lips back together, along with desperate images of fire and decay. We are looking at the hysterical images of a dying man suddenly surrounded by the dying, overcome by the attempt to sew life back together. To see a rejected Jesus left on the cross and on the ground to be covered by ants, is, in this context, clearly neither offensive nor heresy; it's orthodoxy, for Pete's sake, with the death of Jesus one of countless images of suffering and isolation.

The irony is that Wojnarowicz's reading of his piece puts it smack in the middle of the great tradition of using images of Christ to speak about the suffering of all mankind. There is a long, respectable history of showing hideously grisly images of Jesus - 17th-century sculptures in the National Gallery's recent show of Spanish sacred art could not have been more gory or distressing - and Wojnarowicz's video is nothing more than a relatively tepid reworking of that imagery, in modern terms.

This is so obvious in context that one simply wonders what on earth the fuss could be about. Maybe what is truly offensive to men like Donohue is the notion that gay men might actually seek refuge in Jesus' similar experience of marginalized, stigmatized agony. Since the message cannot be objectionable - Jesus shares in our suffering and exemplifies it - maybe it is merely the association with gay men that appals. For the powerful and privileged like Donohue, Jesus belongs in the corridors of power and respectability, among the mainstream, depictions of him restricted to images of pristine, prissy reverence rather than the alienated, despairing, naked agony he actually suffered. The idea that Jesus died for homosexuals is insulting to Donohue; but it is what the church teaches and what Jesus lived.

Hypocrisy? Stupidity? Becoming (always being, actually) the thing they decry; namely that Obama is a Nazi communist socialist terrorist Kenyan constitution-ignorer America hater? Given the keys to power, these guys are intent on turning us into a theocracy, empty of ideas, toeing their unbendable line.

Of course this, this, is just art. Who cares about that?