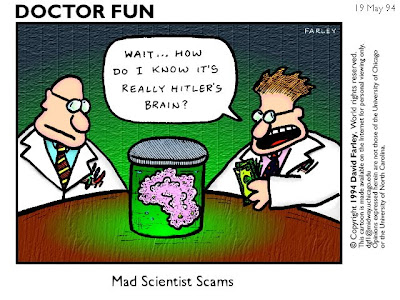 Here's an article referring to an article based on an article about the fact that only 6% of scientists identify as Republicans:

I can think of three testable hypotheses they might look into. The first is that scientists are hostile towards Republicans, which scares young Republicans away from careers in science. The second is that Republicans are hostile towards science, and don't want to go into careers in science. The third is that young people who go into the sciences tend to end up becoming Democrats, due to factors inherent in the practice of science or to peer-group identification with other scientists. In the absence of data, I leave it to you to decide which you find most plausible. But by all means, social scientists should look into this.

Maybe it's a little of all three; but I think we know that the last is closest to the truth. To be interested in learning something new, to be open to where the facts take one, to be committed to basing one's beliefs on what can be shown, and constantly to challenge and push at the edges of what is known -- that is science; and it's what it is to be a liberal thinker. It also -- need it be said? -- explains the negative correlation between science and religion; at least of the fundamentalist highly dogmatic literalistic kind.

Email ThisBlogThis!Share to TwitterShare to FacebookShare to Pinterest
Labels: science and liberalism, scientists identify as democrats