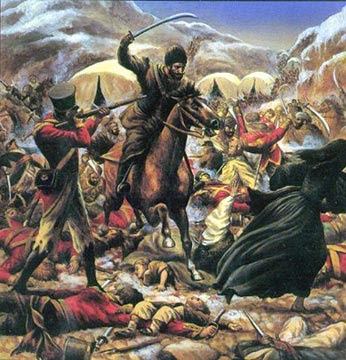 Here is a pretty compelling article on the wars in Iraq and Afghanistan, which begins thus:

General David Petraeus will soon be back in Washington D.C. to report on progress in a war many consider lost, this time in Afghanistan. The narrative that Petraeus and his surge in troops along with the new way of war he is credited in perfecting led to "success" in Iraq is hard to challenge these days. It informs our view of Afghanistan as well, with many placing their faith in the hopes that Petraeus will save us in Afghanistan just as he did in Iraq. The truth is much more complex. Iraq's fortunes changed for many reasons, not only the changes introduced by Gen. Petraeus. And the terrible costs to Iraqis should give pause to those who want to replicate the experience in Afghanistan.

If we hope to avoid learning the wrong lessons for Afghanistan, we have to better understand what really happened in Iraq...

After a concise but comprehensive review of the course of the insurgency in Iraq, the article addresses Afghanistan:

All we have succeeded in doing is pushing all of Afghanistan's problems into Pakistan, a country with nuclear weapons, a huge population and a persistent conflict with India. So now the Taliban and al Qaeda and drug networks are in Pakistan and our drone strikes are pushing them deeper into Pakistan, even into Karachi. How is that an improvement? ...

... In Iraq the American surge led to a strategic reassessment on the part of Iraqi militias. But successive surges in Afghanistan have only led to surges in violence in that country. The Taliban are not changing their calculus. At best when the Americans surge in a village, as they did in Helmand's Marjah, the Taliban may simply move on to another village, knowing the Americans can never achieve enough troop number so make a strategic difference and that the Americans will eventually leave anyway while the Afghan "government in a box" is not coming to replace them.

It's worth taking the time to read the whole thing. The author has spent a great deal of time in the region.

In my attempts to make sense of our continued involvement there, the only thing up with which I can come is that it somehow relates to keeping Pakistan's nukes out of terrorist hands. The article mentions that not at all. Near the end, though, it says this:

The conflict in Afghanistan is a political one and it requires a political settlement. But Petraeus seems to have given up on the hearts and minds approach and is undermining or preventing negotiations, focusing on killing or capturing Taliban commanders. These are easily replaced by younger and more radical Taliban commanders with less ties to the community and less respect for Mullah Omar's authority, which means it will be even harder to negotiate with them. Meanwhile al Qaeda has moved on to Pakistan and it has evolved into something else. It will never again have training camps that could easily be targeted -- it is now an idea and not a base.

That doesn't sound like a strategy that's building a wall around the nukes.
[Added 12/22: From a Canadian correspondent

.... there were leaks about a new National Intelligence Estimate (NIE), the combined findings of all 16 US intelligence agencies. This key intelligence report is explosive and may not be fully revealed.
The NIE reportedly asserts that the $13 billion a month Afghan War is at best stalemated; at worse, Western occupation forces are on the defensive and their vulnerable supply lines increasingly threatened. Taliban is expanding its control, particularly in northern Afghanistan.
Claims by US generals that “progress” is being made in the war are false.
Afghan president Hamid Karzai, who was installed by CIA, put it bluntly last year, saying the US-led war was “ineffective apart from causing civilian casualties.”
The new NIE may also restate a 2007 report that found Iran had no nuclear weapons program. The pro-war party in Washington is desperately trying to prevent its release.
Frustrated American generals and politicians, facing a failing war and ruined careers, are blaming Pakistan for the war they cannot win.

Email ThisBlogThis!Share to TwitterShare to FacebookShare to Pinterest
Labels: war in Afghanistan