Look Up "@sshole" In The Dictionary 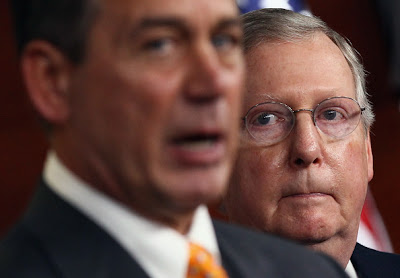 If you want the definition, start by looking up "Congressional Republican." For these are the guys who, senatorially, blocked money for 9/11 first responders -- yep, the people the very thought of whom brings tears to their collective eyes, who went toward the disaster to which Republicans refer in patriotic self-reference unceasingly, especially when campaigning.
No act of disgrace is too hard to follow for these guys. As their tears replenished, not to be outdone by their counterparts across the hall, House Republicans blocked a bill aimed at prevention of forced child marriage. Forced child marriage. They're for it, evidently. (Their reasons, as you might expect, had to do with the horrible possibility that some of the funds might go to groups that support family planning, even, perhaps, abortion services. Yet the bill passed the Senate unanimously, with no objections from such hard-core christianists as Jim DeMint and Tom Coburn. Even diaper-boy was a co-sponsor.) Some of the Republican sponsors of the bill caved to pressure from their asshole leaders and joined those who voted it down. Sponsors. Voted no.
Referring to the 9/11 responders bill, Mike Huckabee, on The Daily Show, first complained that it should have been a stand-alone bill, and blamed Democrats for playing games. It was a stand-alone bill (which tells you all you need to know about Huckabee in particular, and the nature of Republican debate in general). Then he claimed Democrats had politicized it. Unable to say how, he left the subject when it was argued that they not only hadn't, they should have.
That episode of The Daily Show had more to say, powerfully, about the shameful Republican Senatorial behavior.
Too busy shoving each other out of the way to get the next Sarah Palin interview, none of the networks covered the story. When Fox "news" mentioned it, barely, they neglected to mention who it was that blocked the bill. Twice -- the second time being after Shep Smith watched The Daily Show. Isn't the Republican obstruction a central part of the story? Not to Fox "news."
Which network was the only news source actually to cover the story in depth?.... Al Jazeera.
Liberal media? What a joke.
So. For their usual partisan and selfish reasons, Republicans block two humanitarian bills that ought to be no-brainers. Christian, even, if I don't repeat myself. And they get away with it, in part, because no one knows. Because the actual news media are disgracefully cowed by the constant cries of lameness and liberalism from the right, and because the house organ of the right wing deliberately denies and distorts coverage.
Which, of course, is entirely consistent with the fact that in yet another study, we find that viewers of Fox "news" are the least well-informed, the most misinformed of followers of any network. It's not the first we've heard of this, so there's no surprise. And the more they watch, the less they know.
[Same shit, different day: in yet another move designed to embarrass President Obama at the expense of our nation, McConnell has puffed up his already more than puffiness and announced his opposition to the new START treaty. Raising phony objections not of concern to every former Secretary of State, Secretary of Defense, and experienced diplomat from the time of Reagan (of whose original treaty this is mainly a continuation), he pretends to be worried despite having all his (and Kyl's) debunked objections addressed. And, of course, he tosses in the usual and tired jamming-it-down-our-throats nugget. A treaty worked on for years, discussed for months. It's politics of the worst possible kind. Which, by definition, means Congressional Republicans in action.
Assholery of the first order. Enabled and abetted by a bunch of clueless teabaggers, who neither care nor understand the poison they've been peddled.]