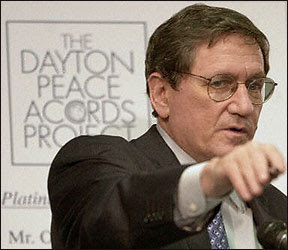 I didn't know him, but for some reason the loss feels personal. I've always admired Richard Holbrooke, and I think his death couldn't have come at a worse time, critical as he was to finding a diplomatic way out of Afghanistan. That he went to the same college my son did, that he was a Democrat who was tough and clearly patriotic, that his parents escaped the Holocaust -- who knows if any or all of these were part of my admiration. For sure, though, it was his obvious brilliance and toughness, his central role in finding a reasonable peace in Bosnia (where I'd spent an amazing summer in medical school), his unwavering confidence in America (and not a little in himself) that affected my view of him.
In the New York Times there was a touching letter to the editor from one of my favorite scientists, Neil deGrasse Tyson, right up there with Carl Sagan at broadcasting unbridled joy in the pursuit of science and the cosmos. I'll paste the whole thing here, because it's succinct and important:

When I gave Ambassador Richard Holbrooke a personal tour of the newly opened Rose Center for Earth and Space and Hayden Planetarium in 2000, I could not help notice how fluent he was in the depth and breadth of his cosmic curiosity.

True science literacy is less about what you know and more about how your brain is wired for asking questions. Later in the tour he confessed that, as an undergraduate at Brown, he studied physics before switching to politics.

I could not resist asking him whether that exposure to physics made a difference in his career as a diplomat, especially in tense, war-torn areas of the world that are resistant to negotiated peace settlements.

He answered emphatically “yes,” citing the physics-inspired approach of sifting for the fundamental drivers of a cause or phenomenon — stripped of all ornament. To get there, one must assess how and when to ignore the surrounding details, which can give the illusion of importance, yet in the end, are often irrelevant distractions to solutions of otherwise intractable problems.

Mr. Holbrooke’s career was a living endorsement for more scientifically literate peace negotiators in the world.

In the same edition there's an opinion piece by Roger Cohen, a tribute to Holbrooke that's also worth a read:

It was the worst summer. The war seemed as unending as the excuses of Western leaders for their inaction. In a besieged Sarajevo, people raised hands to their necks in a gesture of self-strangulation as the flat fracturing boom of another shell reverberated in the valley.

Then Richard Holbrooke appeared in the snake pit.

I’m not sure we breed his like any more in this age of narrow-gauge specialization. The pusillanimous paper-shufflers — the kind that denied him a deserved Nobel Peace Prize — busy “putting the best possible twist on bad policy” multiply; they complicated Holbrooke’s life in the Obama administration. American power in 2010 is not what it was in 1995.

Still, this untimely death is a clarion call to America to set aside smallness in the name of values that can still inspire. Holbrooke was a fierce believer in the U.S. capacity for good. Here stood the nexus of his multiple beings. It is what made him so consequential in so many places and saved so many lives.

Wilsonian idealist? Ruthless realpolitiker? He was both rolled into one dreamer-doer. As he once told me, “We cannot choose between the two; we have to blend the two.” How could Americans forsake their idealism if they had become Americans precisely in defiance of the hateful ideologies that drove Holbrooke’s Jewish parents from Europe and ooze from Waziristan caves today?

The second piece just confirms what I felt I knew. The first, though, is chilling. As I've written many times here, I think our nation is, in the long run, at far greater risk from those who deride science, who consider well-educated people elitists to be sneered at, than it is from terrorists. If it comes, our end will evolve from within, Palinized, Texified, teabagged. Neil deGrasse Tyson was, I think, encoding that concern in his letter. In all areas, for our survival, we need people taught how to think, who exemplify "science literacy."

Richard Holbrooke was everything Sarah Palin and Glenn Beck consider despicable: smart, educated, thoughtful, liberal, persistent. He didn't quit halfway through his first term. He didn't go on wild and fact-free tangents. Unlike those two disgraces and the rest of the RWS™ and the teabaggers who revere them, he studied, he learned, he acted, he stuck it out, he found solutions.

I hope there's someone to take his place. We need more like him.