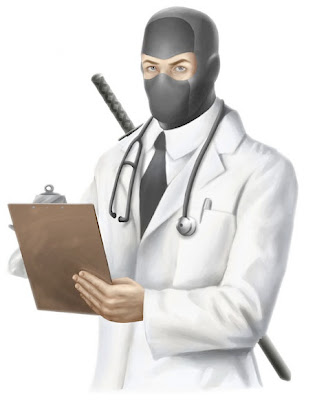 Warning to people planning to get sick sometime in their lives: just because a guy has "M.D." after his name, it doesn't mean he's intelligent, competent, or able to process data. It's like the old joke: what do you call a guy who graduated last in his class in medical school? "Doctor."
With that in mind, I give you the most public embarrassment to my chosen profession, Dr Tom Coburn, Senator from Oklahoma:

I'd issue this challenge: anyone who thinks we oughta pay for tax cuts, oughta have to put up a list of programs that we oughta eliminate to pay for them. I put up every time when people are wanting to spend money a list of options that we can do to make it that we don't increase the very problem — hole that we're digging in.

Admittedly it's hard to figure out what he's saying. But I think it's safe to conclude that somewhere in the salad he's implying that it's up to those who reject the idea of tax cuts to propose who and how we should pay for them. I'm gonna do something stupid, he says, but it's up to you to deal with the consequences.

Any way you deconstruct it -- and the points are severally obvious -- this has to be among the top ten stupid things ever said by a politician. And that's in the era of Michele Bachmann, Sarah Palin, Mike Huckabee, and Mitt Romney. So let's narrow it to the last two years. Rarified air still, if ever there was.

At least he's in Congress, where the only thing he can kill is the idea of America. If he ever goes back to his former profession, he could kill you. Especially if you're a woman.