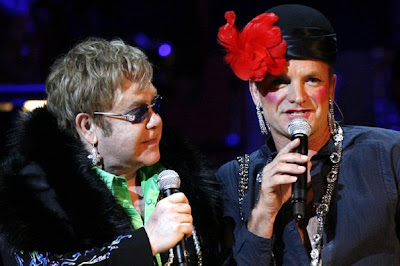 [Normally I don't try to explain the clever witticisms of my title pictures. This is, in part, because no one ever seems to notice -- much less appreciate -- them. But in this case, recounting the path might shed light: based on the title of the post, I looked for images of johns, as in guys who patronize prostitutes. Not much from which to choose. So to be more precise, I searched "john sting..." Enough said. Besides, I don't want to distract from the point of the post. For that, we have Frankie.]
Came across this article, making an undeniable -- yet under-considered -- point. It's...

....about John McCain and John Kerry, and how the two men were and are portrayed, and how things have turned out, in real life. McCain and Kerry have quite a bit in common. Both long-term Senators, both lifetime “government employees”, both veterans, hell, they both married wealthy women (the second time around), so there’s some similarity even in their personal lives.

They’re also members of a very exclusive club. They both lost Presidential elections.

And that’s where the similarities end.

After John Kerry lost to George W. Bush, he returned to the Senate and simply did his job there, and he’s continued to do his job there.

Kerry lost, big, on climate change this year and he still rallied and led on START, rather than booking time on cable shows to bitch.

Kerry didn’t subject the country to two years of bitter griping, temper tantrums and petulant demands. Kerry didn’t pursue purely personal vendettas against whole groups of voters who (allegedly) “betrayed” him. Kerry didn’t flip-flop on each and every policy position he has ever held. He voted and votes the same way he always did. John McCain, remarkably, considering what we were told about him, has done all those awful things since his loss in 2008.

In the 2004 Presidential election, political media and pundits portrayed John Kerry as an elitist, foppish, slightly silly “flip-flopper” who lacked character and core convictions. The same political media and pundits lovingly and carefully nurtured the fairy tale that John McCain is a rock-ribbed, Country First, straight-shooter. Events since tell a radically different story.

How can this be? Wasn’t this script supposed to run the other way? Could they have been more wrong?

Of course it's about character, and about perceptions. It's about startling differences in grace, in seriousness, in effectiveness particular to those two men. But it's also about the laziness and the herd mentality of the media, and of the consumers thereof. In the fastest of fast-drying concrete, such conceptions and misconceptions become cast. Kerry was a flip-flopping elitist; McCain was sturdy, heroic, patriotic (Kerry, who risked his life to save others in Vietnam, wasn't), a man of high principle. And, like a pack of hyenas, the media swallowed the narrati, made them entrenched, never veered, once established, from their shared wisdom. Insight.

How sadly and completely they fail their obligations. How easy it must be to do that sort of "journalism." And how destructive.

My question is this: is such shallow punditry the chicken, or the egg? Who leads whom? From where do the stupid come?
To me it's indisputable that, as a general principle, our media have let us down, failing to uphold their bargain with the democracy. Namely, they've long since (with only a couple of exceptions) forsworn their role as serious investigators, educators, questioners on serious matters. It'd take more work, thought, and time than that of which I'm capable to consider how and when and why it happened. But happen it did. Fox "news," as dangerous and damaging and despicable as it is, is only the ultimate extension of the steady replacement of deep journalism with shallow and dollar-driven entertainment. It just took it to the logical conclusion. (Assuming that by "logic" is meant "willingness to substitute the pretense of journalism with overt propaganda, and to place profit over purpose.")
Nevertheless it's interesting to wonder: when such memes as Kerry-as-fop and McCain-as-principled take hold, what explains it? Are the concepts like diseases which attack the most vulnerable, spreading among those with no natural resistance? Stupid talking heads, for example, and teabagger types? Is it as simple as accident plus laziness?
Or is it more dire? Is it the deliberate and cynical planting of ideas by those with dark motive? We know this happens, and it's no surprise at all. But why is it so effective? Are the "journalists" on the take. Is Fox "news" not the only gaggle of gag-worthy grifters who take their marching orders from above? Are they all on the take, or are they just all that dumb and superficial?
And what explains the rapidity and ease with which stupid shorthand becomes stone-carved seriousness? Has dumb news produced the public preference for pablum, or is it the Texification of education? Are the dumbing-down and religioning-up merely the inevitable results of increasingly complex and overwhelming problems, or has it been a deliberate, cynical, and coordinated (not to mention highly successful) long game, planned and carried out by the Roves and Norquists and Murdochs of the world? Was public pliability their great insight, on which they built their strategy, or did they first set out to stupefy us?
I wish I knew. For now, I all I know is that it's ubiquitous and depressing. And only showing signs of getting worse.