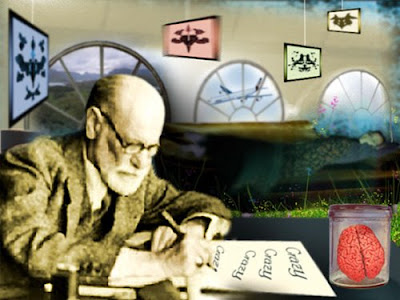 Now, for a little psychology. Or to put it more accurately, a wish I were able to look into their heads and understand how Rich Lowry and David Brooks, without a scintilla of self-consciousness, can expose so revealingly their unfulfilled adolescent fantasies, the disappointments they must have had in their pubescence.

Or is that it? Frankly, I have no idea. But there they are, two elitists (in the Republicanesque, ignorance-is-good, smart-is-bad meaning of the term) if ever there were such, fawning. Sarah Palin winked, they ejaculated. Probably simultaneously. Maybe they were talking to each other on the phone at the time. Seriously. How is it that guys whose style is to drop literary references like rose petals, who flash erudition like psychos in raincoats (the gent in the photo, by the way, was the mayor of my hometown, Bud C----, to whom my aunt, while on the city council, used to refer as "Bud Lite"), are gaga -- and by gaga I mean tongue-out, hyperhidrotic, pustulo-papular-squeezing-in-a-mirror -- over a woman who proudly frames herself as the opposite? Who ridicules, to the ecstatic cheers of her supporters, their very type? (Funny thing: they're not buying it in Alaska.) What's the dynamic, anyway? Is it some sort of BDSM thing?

Going out on a limb here, I'm guessing Rich and Dave were übergeeks in high school. Couldn't get the cute girls to look at them if they were bleeding on the floor. And whereas I consider both of them to be nearly clueless, reality-testing-wise (cheerleaders for the war, going in, as they both were), I sense they're both not below 100, IQ-wise. I bet they're able to recognize talking-points when they see them; I know they can tell when someone is parroting prepped phrases, free of understanding. Giving credit where credit is due, I'm certain they know Miss Sarah was bullshitting her way through the debate and that if the format had allowed followup questions, she'd have upped her baseline blithering to prodigious levels. So what gives?

Ping: they spend all their adult lives proving how brilliant they are, dripping sarcasm (sarcasm? what's that?) when talking about their perceived inferiors. Pong: they profess to love -- just moosie-love her to death -- her for her, well, her, uh, style. Her gen-u-wine genuineness, her rejection of everything they stand for. Socially.

"Serious people." Anyone who listens to or reads Brooks (my history of same now being officially over) knows how much he loves that phrase. Professes to admire those who think deeply about deep problems. So this goes beyond simple cynicism or despondent desperation. Something else is at work. Suppressed somewhere in his endorphinized, androgen-starved brain, subverted by some unspeakable and deeply personal need, there must be a dormant detector of dung. But he flushed it away, like a soiled (as it were) tissue.

I'm a liberal. I'm empathetic, I wish well for humanity and even for many of the people in it. So, for their sakes, I deeply hope Rich Lowry and David Brooks will surprise us all, redeem themselves, by waking up some day soon feeling really, really, really embarrassed. It'd be redemptive, if ever so slightly.