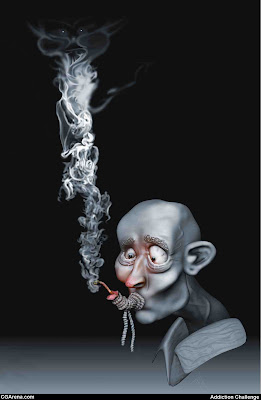 I sit forlorn in a local coffee shop, in the death throes of internet withdrawal. For a couple of days, my access at home is totally kaput, and for the previous five it's been intermittent and marginal. I'm told there's no hope until at least Tuesday. And with the economy as it is, I can spend only so much on latte.´ So my posting and commenting will be sporadic at best.

Meanwhile, let me say as respectfully as possible: Verizon online services is the worst example of customer service on this planet and likely all neighboring ones. It sucks beyond anything I'd thought possible. Several times a day for nearly a week, I've been on the phone with them. I've been disconnected at least half of the time, with no callbacks (helpfully, they always ask for a number to call back on should we be disconnected. We have. They haven't.) Grinding my teeth, I've listened as a robotic female voice tells me most problems can be solved by going to their website. THEIR WEBSITE. While I have no access. Pacing in a rage while she goes through a now memorized list of options, speaking words into their inhuman option tree, I've been given erroneous information several times. One "expert" managed to reprogram my router so it is now totally defunct. I've been given numbers to call that don't go to the proper place. This is a PHONE COMPANY ferchrissakes. They are absolutely awful, unimaginably so. They couldn't provide poorer service if they made crap their gold standard. Each conversation begins with the same apologies, the same requests for the same information, and ends, after an hour or two of fruitless effort, with the words "Thank you for choosing Verizon and have a nice day."

Some day I'll invent some sort of zapper that vaporizes the person on the other end of the line. Even if I make it so that it only works for Verizon tech support and customer service, I'll make a billion dollars. Until, hopefully, they are out of business forever. It's no exaggeration to say that this experience, customer-service-wise, has been the worst I've ever suffered, by a factor of a trillion (and since that number is tossed around like a wiffle-ball of late, light as a feather, let me point out it's actually a very big number.) Until this week, I'd never have believed a company that provides such poor support could survive. But then, I'd never have imagined a person as superficial and so obviously a fake as Sarah Palin could generate loving crowds, either.