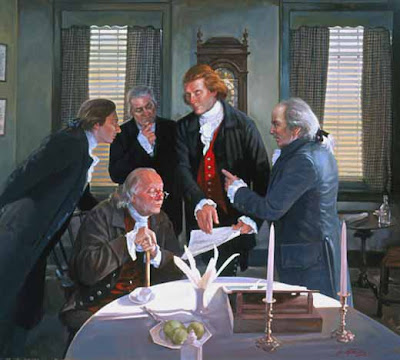 I guess the real question is, can our system -- so brilliantly set forth by our founders -- handle problems as complex as the ones we now face? Clearly Jefferson, Adams, Hamilton, Washington, Franklin... understood the frailties of the human mind, else they'd not have seen the need for so many checks and balances in the government they created. Nor must they have had complete faith in the corrective power of the electorate, given the barriers to immediacy they established. Still, I'd guess they'd be appalled -- every last one of them -- at the spectacle we now witness, magnified by but in no way limited to the response of all the actors to the current economic crisis.

The Seventy-Sixers were about deliberation, suffused with knowledge of what came before and with thoughtful concern about what might follow. They were educated men, and while they weren't above a little yelling now and then, nor free from self-interest, in the end it seems they were able to find common paths forward. To me, it shows the value of fact-based thinking.

Far be it from me to turn this into some sort of screed about creationism, but I think it DOES matter when we elect leaders who simply reject data when it contradicts their preferred beliefs; and that applies whether it's about the age of the Earth, or about economics. Teach the controversy? Like this? Were I the sort, this might be a time to mention that, like George Bush, Sarah Palin -- our potential president -- believes dinosaurs shared the sidewalks with people. But why bother?

For a minute there, when oil was at $140 a barrel, it seemed people might be ready to be serious. What happened? "Drill here, drill now." Well, it is catchy. And easy. Fits right there on the bumper, next to the yellow ribbon. Crisis creates credulity.

For years, people have been warning about the effects of the housing bubble. From the right, of course, there was denial, in their preferred form: derision. So now it seems we're in full crisis mode. Surely people will leave personal politics, gotchas, party-first behind, right?

So I used to think.

We've been fed the politics of hate, of diversion, of lying. And, because it's so easy, we've bought it. We've elected and reëlected people based on fear, on unwillingness to admit there are problems, on taking the easy way out. People who reinforce our prejudices rather than challenge them. Sarah Palin actually claimed the mantle of Joe Six-pack!! And people love it. They wave lipsticks and cheer themselves to tears. Have a beer! She's just like me! And me would be a great president!!!

In the past few days we've had to stomach the circus of politicians on both sides, posturing, claiming credit, placing blame, maneuvering for their political fortunes; sabotaging, backstabbing. Lying, ignoring. While our president flaps around helplessly, impotently. And while a candidate who supports every policy that got us here (or has until the lights came on, but still really does as long as you think he doesn't) looks still to have a damn good chance of being elected.

We can only blame the politicians for so much. We elected them. Happily. And now, while it's falling down all around us, we have a choice of, on the one hand, two people with coherence and intelligence and desire to enunciate problems in all their width and breadth, to listen to options, even give credit to the other side (which, according to the other side, is a BAD THING!!!) And the other two. One of whom brags about knowing nothing and proudly rejects science, and the other of whom, in this crisis, has been going off like the old ping-pong balls on mousetraps thingy. And millions of us love it, are in ecstasy over it, weep for the simplicity of it all. Slap on a magnet and wait for the rapture. God has a plan for us all.

Maybe it matters not for whom we vote any more. Neither our government nor the people who elect them have enough thoughtful folks among them to turn the tied. When the going gets tough, the tough are outnumbered. Ladies and gentlemen -- and I mean this in all sincerity, and only in the best and nicest possible way: we're fucked.