Swing And A Miss 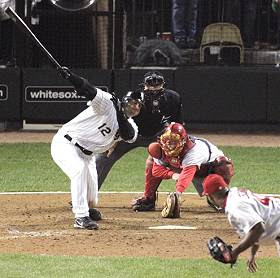 Once again, I found myself less than whelmed while watching the (final, thankfully) debate. As to policies, just back and forth with McCain in particular ignoring responses to his thrusts and repeating them over and over. (I do think his dismissal of "health" of the mother -- with air quotes and an ugly face -- when discussing abortion did McCain no good.) With respect to the much anticipated attacks, the "kick his ass" plan of McCain, I'd say he missed badly, sounding crotchety and small, interrupting rudely.

Tie goes to the runner. Obama, being the smooth-running antelope, gets the win.