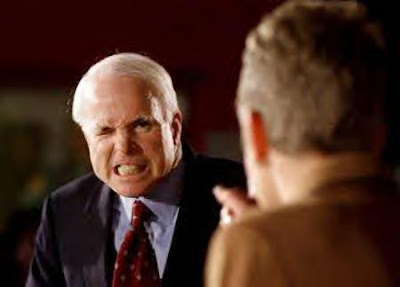 In post-debate chatter, many talking heads and tapping fingers have noted that McCain didn't "take the opportunity" to attack Obama face to face over the now-prime issues of his campaign: that he sleeps with terrorists, hates America, and disrespects our troops. The righties say McPOW is too nice or he blew it, or some combination of the above; the lefties say he didn't have the guts.

I think the reason is very clear: he didn't want to give Obama an opportunity, on national television, to refute -- which McCain knows he could have done easily and eloquently -- those smears. He'd much rather be able to continue to use them.

His "failure" to raise the issues was nothing of the sort. It was part and parcel of his cynical, desperate, and extremely revealing campaign. The only amazing thing about it is that there are those, Broderites, who continue to argue that the "real" McCain, the decent hero, hates doing this, and that's why he seems so angry. Bullshit. The real McCain IS angry, all the time. The real McCain is the guy we see now, stripped of his carefully crafted and credulously continued (by the press) disguise. "Stealth candidate?" Now we know who.