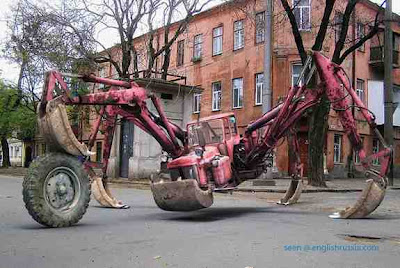 When planning surgery, weighing the options and discussing them with patients, I always had to consider the worst possible outcomes. Or maybe it's just because I'm a Democrat.

Whatever the reason, I find myself less than confident that Obama will win the election. After flailing around aimlessly, bouncing from one ineffectual theme after another, revealing his central lack of conviction on pretty much anything, the McCain campaign seems to have settled on something that's getting apparent traction: Obama's a socialist, and Joe the Plumber doesn't like him. It makes no sense, it's completely baseless and unfactual; it's cynical and nasty.

In other words, it's the perfect Republican strategy.

And, watching interviews of pundits and of McCain's fellow-travelers, it appears people are buying it. "Socialist," they holler. "Marxist." One is left to wonder how many of those hooters could define either socialism or Marxism; and one is quite certain that they could no more outline specifics of Obama's economic plans that amount to it than they could name ten presidents. What they can do is latch onto that perfect phrase: "income redistribution." I've written about it before, nearly laughed it off because it's so ridiculous.

God knows I have abiding faith in the superficiality of the American voter. That both candidates voted for the bailout (which can rightly be viewed as a partial step toward socialism, except that it isn't the long-term goal) escapes them. Perhaps that's because John McCain was so two-faced about it that he nearly ran himself down dashing in and out of the room. And mainly, the fact that what Obama proposes is simply a readjustment of tax rates -- just as McCain (and every candidate who's ever run for president) does, except that McCain's proposals exacerbate the inequities and deficits and disaster we've gotten under Bush -- makes no difference: McPalin says it's socialism, and therefore by golly it is.

From the beginning, McCain has made it clear he thinks the electorate is stupid. It was just a matter of finding a message sufficiently idiotic to match up. No sense appealing to our better selves; no point in facing facts: Obama's pretty much got that segment locked up. Find something really moronic, dumb it down to the most simple-minded, and run with it. And so he did. And so I'm worried.

In my state, Washington, the lowest turnout in the primaries was among the 18 - 25 age group. Now it's true that on the Democratic side, the primary was essentially meaningless because the caucuses had already determined the outcome. Still, it concerns me. It's that group that has come out in huge numbers at rallies, and who are the core of the grunts in the campaign. I worry that they'll follow prior form and not vote in the needed numbers. Which would be doubly tragic. It's their future that has been mortgaged away and degraded by the presidency of George Bush. It's their security that would most certainly be placed further out of reach by John McCain, who differs from Bush on the economy and on foreign policy only in the ways he'd worsen Bush's mistakes. The "socialism" theme has the crazies riled up; the recent polls might have the young people overconfident.

There is, of course, one actual socialist on the ticket: as governor of Alaska, which owns its oil, Sarah Palin annually redistributes the wealth of the state to its people. And every time they hear about it, her crowd of America-lovin' socialism haters cheer and weep and look for an Obama supporter to beat up.