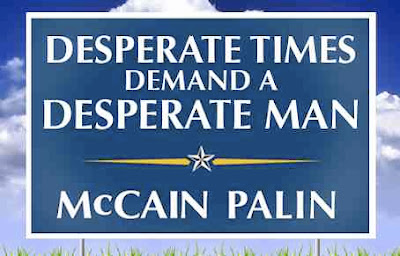 So McCain's brain trust (look up "oxymoron" and.... [whack!]) announces that for the rest of the campaign they'll be spending all their advertising money on attack ads. Actually announces it!! So they can, by their own description, be "turning the page" on the economy. Remember back in the beginning, when McPOW promised to run a respectful campaign, based on the issues? His wife, too.

Here's what I'd love to hear from Barack Obama:

John McCain has announced that the last month of this election will be full attack mode, nothing but. The politics of attack, distraction, distortion, and lies are exactly what has brought us to where we are: economy in shambles, an impending energy crisis, climate change unaddressed, staggering debt, two mismanaged wars, our place of respect in the world, gone. All because we keep electing politicians for the wrong reasons, baseless attacks and barbeques. Voting our fears, our hates, having been turned away from the important issues. We are where we are exactly because that kind of politics has always worked. It got us George Bush and Dick Cheney. Twice. It produces a Congress full of hyperpartisanship, people unwilling to find common ground with the other side. John McCain even ran an ad saying that because I agreed with him on some things, I wasn't fit to be president. What does that mean? That his ideas are so bad that agreeing with him at all, ever, means one isn't fit to lead? This is craziness that has to stop.

Now, at this time in the history of our country, when it may be literally true that if we don't solve our problems soon we may not survive as a nation, if we let the same old politics work, what hope is there? If now, of all times, we don't demand real discussions of real problems, if we think we can reduce discourse to ideas that fit on bumper stickers, if we are persuaded by winks and smiles and snarls, if we let politicians get away with lying and smearing as they always have, then we have no one to blame but ourselves. My entire political life has been based on the idea that change comes from the bottom up. And where it starts is once and for all, now, when nothing could be more important, a resounding rejection of politics as usual, politics of hate, politicians who want you to ignore problems rather than face them. It can happen. But only if now, finally, when it matters most, we rise up and say "Enough!!" We demand it. We are better than that. Now. There's no more time. Our leaders reflect who we are. Enough of talking down. Enough of memorizing talking points. Enough of fear and hate and simple-minded slogans. Enough of politicians with no new ideas, who want to bring us down to their level rather than us lift up. Enough. Enough. Enough!!!

And if he were really ballsy, he's say this:

I'd be okay without that last paragraph, though.